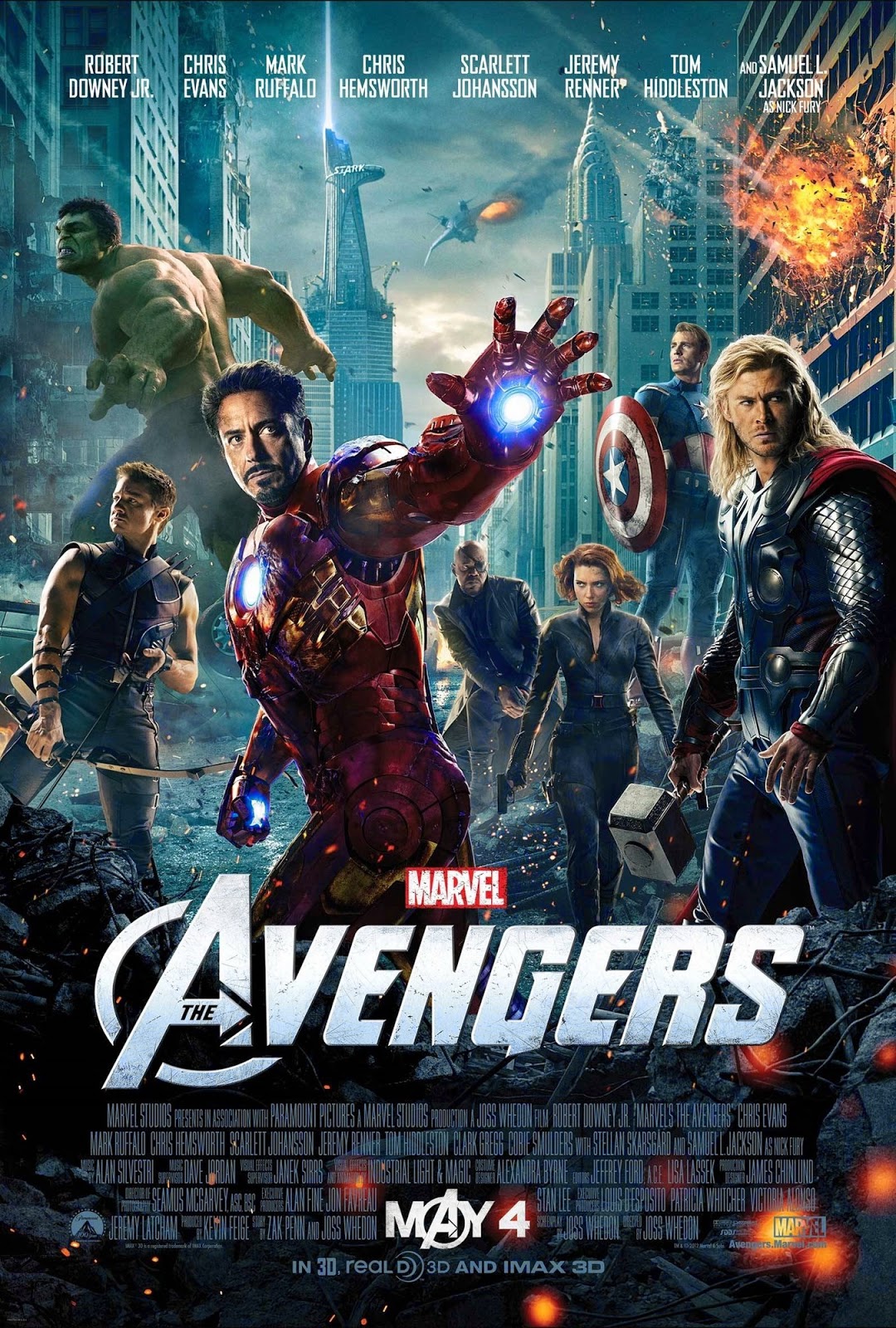 Synopsis-When Earth is threatened by Loki, a team of Earth's mightiest heroes will band together to bring peace before humanity is enslaved.

This was the endgame, the big finale, at least for the first phase of the plan Marvel had, what the first Iron Man teased back in 2008, it succeeded and changed the landscape of blockbusters, continuing to do so in fact. The Avengers is a landmark film, there's just no denying that, but is the film perfect? No of course not, but for what it wants to be, this is as close as it could've been.

Just from the synopsis above, it should be fairly easy to pick up how simple the plot is, which is by no means bad, but it will leave some wanting more out of an "epic" film. The story beats are never a surprise, the character development couldn't be more obvious, and the third act is a huge battle with little story, yet it all works, the actors have fun delivering the lines, while the spectacle is always fun, even years after the charm of shared movie universes has lessened, this still feels fresh. Despite the lack of complexity, The Avengers, manages to wow not only audiences, but critics, some are more impressed then others, but, it's still the experience we remember, flawed, yet still worth revisiting whenever the time is there.

Everyone manages to bring their A-game for the film, Robert Downey Jr. is as perfect as ever, as is Chris Evans, making for some great interactions, as well as why the film works so well even now. Even some of the actors who had previously not been so great improve here, Tom Hiddleston really shines here as Loki, this is the film that impressed the fans, not Thor, speaking of which, Chris Hemsworth also shows improvement in his performance, playing a sort of middle ground between Tony's snark, and Steve's straight arrow attitude.Mark Ruffalo joins as Bruce Banner, making for the best performance done for the character to date, unlike the previous actors to take the role, Mark bounces off well with the cast, it's really charming to witness. Scarlett Johansson and Jeremy Renner return as Black Widow and Hawkeye respectively, Scarlett improves massively from her last appearance, as does Renner, despite the common complaint about the lack of Hawkeye in the movie, I enjoyed his role in the film, he's hardly a weak link, he just needed more scenes to work with.We also get reappearances of other characters, all having as much fun as they can with their roles, it provides some substance to the action.

Every so often a film comes along that changes how we view films for years to come, The Avengers, is one of those, the action was on a massive scale that wowed the world, while the characters were there to make it feel like a real game changer. Even though the film can be too simple at times, which restrains it from being a better film, but it is close to the perfection of what it wants to be. The Avengers is an amazing experience, I'd say watch as soon as possible, but everyone's seen it, so watch it again.