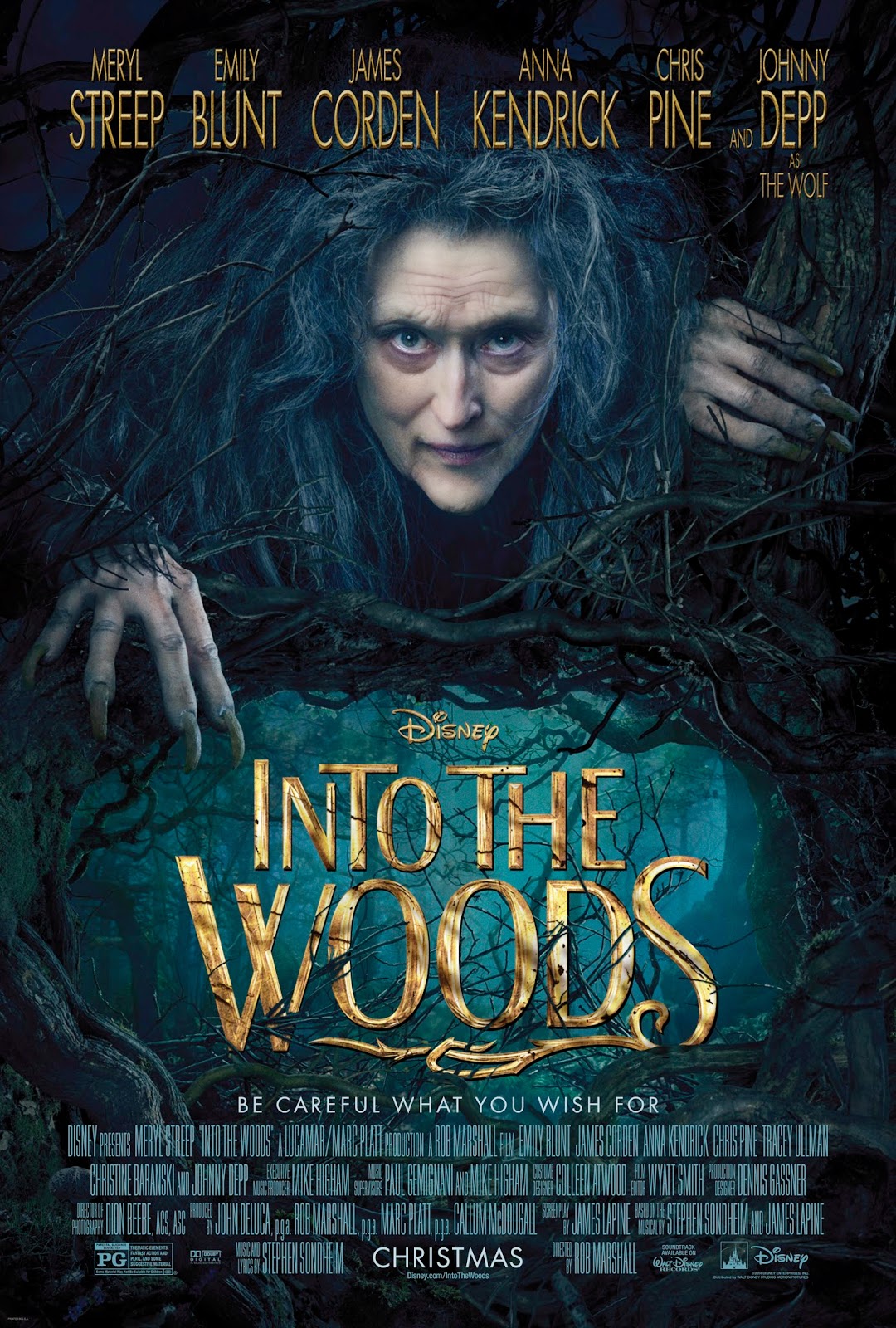 Synopsis-A Baker, and his Wife are tasked with retrieving various items for a Witch, to reverse their childless curse, they will journey into the woods, encountering many well known fairy tale characters the story may be more twisted then they expected.

It seems Disney has been going on a different direction as of late, taking more risks with their image, I can honestly say I'm surprised with how willing they were on keeping Into The Woods dark and mature. Admittedly, this movie is not as dark as the original play, but the Disney of a few years ago would not have even been as dark as this, it really is impressive to see it play out.

Having never seen the play beforehand, I was impressed by how much I loved the music, having been on the fence on the film based on the trailers, I was surprised, the music is really catchy and works well in the context of the story. It was pleasant to see the actors being good as they performed their songs, sometimes it just feels nice knowing the entire cast had good singing voices, especially when some studios will be more willing to hire a big name actor because it sells more, instead of talent for the part. Every song works well, but the best song in the film has to be "On The Steps Of The Palace" performed by Anna Kendrick, it perfectly gives an understanding of how this film's Cinderella acts and thinks to her situation, plus it really is just so beautiful and hilarious to listen to.

The actors, as mentioned before, really do give good performances, whether it's the over top performance of Meryl Streep as the Witch, Daniel Huttlestone as the naive and dopey Jack, or James Corden and Emily Blunt leading as the Baker and his Wife. The performances mostly get their charm from how seriously the actors take the silly, sometimes cheesy personalities the characters inhabit to make its point, the point being that these fairytales are pretty messed up when you think of them as an adult. Even the weirdest performance in the film isn't bad, it's just weird due to how they chose to make the character appear.

If there's one thing that really does lessen the quality of the film, was the approach to some of its effects and costumes, it never seems to fully commit to looking like a cinematic experience, opting to keep a stage-play look to certain bits. While it's understandable to want to make the film remind audiences of the play, it comes at odds with a film that looks big budgeted otherwise. The weird performance mentioned earlier is from Johnny Depp as the Wolf, he's fine, but the costume given to him just feels so off here, some may argue that its the point, but it gets too on the nose to make the metaphor work effectively.Thankfully, the visuals still come up good in most of its settings, leaving a good impression by the end, it just could've been more perfect if they had avoided trying to mesh the play feel to it.

While not always perfect, Into The Woods is a good reminder of how Disney has changed in recent years, hopefully this trend doesn't stop soon. Watch the film, but be aware that the look won't always work, it's definitely one of the better musicals in recent years.