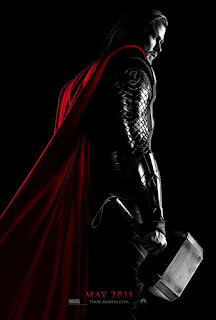 Synopsis-Thor Odinson is next in line for the throne, but after some trouble with the Frost Giants he is banished and must prove himself worthy of his status to regain his hammer Mjolnir and return to Asgard.

After nearly two decades in "Development Hell" Thor was finally getting made by Marvel Studios, after the success of Iron Man, Marvel decided to start work on Thor penning it as a film that would be a bit more different than the average superhero film. Thor finds itself feeling a bit more like a rom-com when stacked against the other Marvel films, leading to a mostly mixed bag.

Asgard is a beauty to behold here, thanks to the special effects provided for the movie, the world crafted feels right. The designs of the suits in Asgard are simply amazing to look at given the unrealistic nature of the comic, this film provides a great look for the characters that it's hard to believe anyone doubted it could ever work. Special effects used for the Destroyer, and the Frost Giants also look great, but they are not the best that Marvel has had to offer even compared to the previous films, still for how unbelievable some may feel for the characters here, it's handled well enough to work. On the other hand, much like the first Iron Man, the action here leaves much to be desired, it just does not do much justice to the God of Thunder.

Chris Hemsworth stars as Thor, he provides a good performance as the character, not as suave as some of the other leads in Marvel Studios, but he can do the funnier bits while still playing it straight, so it works. Natalie Portman plays love interest Jane Foster, who is fun to watch and provides some nice relief, but not enough to make her one of the better female leads in the universe. Tom Hiddleston plays Loki, Thor's brother/ antagonist, Tom is good in the role, but he lacks much of the charisma to make him a compelling villain, at least in this movie. Anthony Hopkins plays Odin, Thor's father, he plays the role well enough, but is not given enough time in the film to provide the emotional punch the story needed. Stellan Skarsgard and Kat Dennings play as Jane's assistants Erik Selvig, and Darcy Lewis respectively, Stellan's character is okay and he plays the part well, but Kat on the other hand is horrid,  every time she talks you feel a laugh track is not far behind, making her a very annoying addition to the cast, quite possibly the most annoying addition in the MCU. Along with that Clark Gregg reprises the role of Agent Phil Coulson from the Iron Man films, while Jeremy Renner plays Clint Barton (yes Hawkeye for all you geeks out there) in a cameo that was a tease at best.

The films main point of interest for the story is the character interactions, and the relationship between Thor, Odin, and Loki, it's fine, but leaves much to be desired. It has major flaws in the action and in Kat's character, but what works here is good, so it's sad these things keep it from it's full potential.Thor does well in introducing the characters in a live action setting, making it a worthwhile addition to the film universe, but it comes up a bit short otherwise, easily the weakest film in the MCU.