BoJack Horseman Season 1-Back On Netflix He Was Famous 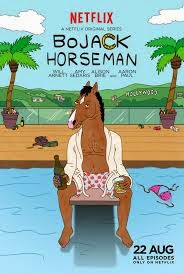 Premise- BoJack Horseman, a former television star of the 90's sitcom "Horsin' Around", is trying to write a memoir, keyword, TRYING. When his publisher gets tired of waiting they hire a ghost writer, Diane Nguyen, to finish the job, together, they will go through BoJack's life while encountering issues... Often caused by BoJack himself.

When Netflix began producing shows, many were surprised to realize how much quality was being put on them, even more surprising, the quality of the content continues to this day. BoJack Horseman,  was a show that looked unappealing to me, yet when I heard positive things online, I decided to give it a shot, not only was I hooked, I still find myself re-watching the show between breaks. BoJack may be one of the most likable leads, who is meant to be unlikable in recent memory, he's just too hilarious to hate. Netflix is truly beneficial to shows like this, I can't wait for season two.

Will Arnett is perfect as the irresponsible has-been, BoJack Horseman, his voice just hits the right amount of A-hole while still retaining some likability, he's so perfect in the role, that at times you can forget it's a celebrity voice. Aaron Paul, plays Todd Chavez, BoJack's roomate/freeloader, very hilarious, and a great character for BoJack to bounce off of. Alison Brie, is charming as the voice of Diane Nguyen, Brie has showcased talent elsewhere, which is showcased once more here. Amy Sedaris, voices BoJack's on-again, off-again, girlfriend/agent, Princess Carolyn, definitely a strange character that works well, she's given some great lines, while also feeling rather unique, largely due to her position in BoJack's life. Paul F. Tompkins rounds out the main cast as Mr.Peanutbutter, BoJack's rival, he's probably the least interesting character of the show, but he has some great moments as the Ned Flanders to BoJack's Homer Simpson.

If you've got Netflix, I highly recommend you watch this show, whether it's the great lines, or how well the continuity is implemented, this show is hilarious. My particular favorite episode is Live Fast, Diane Nguyen, if you must watch the show out of order (you shouldn't) I say watch that episode first, it has some of the best lines the show will offer. BoJack Horseman is one of the better animated shows to watch in recent years, watch immediately and completely.