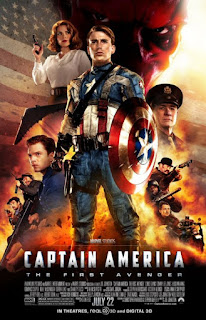 Synopsis-Steve Rogers  just wants a chance to fight in World War II, his chance comes when he becomes the subject of an experiment to create the perfect soldier, now he will fight against the deadliest group in the war, Hydra.

After a horrid film in the early 90's and some legal troubles, Captain America:The First Avenger was finally getting made. Viewed as something that would be a bit silly to work for a modern world, Marvel was determined to make it believable and accessible to all audiences.Keeping the character earnest, while updating certain aspects, would led to another hit for Marvel.

Some may look down on this film's effects because the movie might've benefited if more old-school effects had been implemented to better suit the time period, but honestly what the film did worked great. The effects used to make Chris Evans look incredibly thin, are surprisingly good, it's almost like he actually was really thin for that part of the film. The effects used on the battles are well done and make the war setting that much more believable, it's almost like looking at a modern war serial or WWII propaganda film.

The performances in this film are great, Chris Evans leads as Steve Rogers, also known as Captain America, he provides a fun take to the character that acts as good and well mannered as Cap should be, easily one of the best performances to date for this series of films. Hayley Atwell plays Peggy Carter, Steve's love interest, possibly having the best performance from a female lead in any of the Marvel films. Hugo Weaving is antagonist Red Skull, having an evil and strong feel to everything he says and does, making him a really menacing villain, he doesn't have a deep back story, but he doesn't need it, the understanding of his goal is more than enough for a film that is meant to feel more like a  film from yesteryear. Sebastian Stan plays Bucky who in the comics is Cap's sidekick, but here plays more like an equal to Steve, he works and his performance does pay off in a later film. Tommy Lee Jones plays as Col. Chester Phillips, stealing the show with every line he shouts off, it almost makes me wish he had a short focused on him. Dominic Cooper plays Howard Stark(yes Tony's dad) and he plays it so well that you can tell where Tony gets his personality from. The rest of the cast plays exceptionally well in their roles,major props to the people in charge of the casting here.

As mentioned before, the film plays like an old school adventure film, almost like a serial, and it's just a ton of fun to witness, especially in a time when so many are trying to take everything too seriously in films. The story moves swiftly but never to the point where the audience will feel lost, As a whole, Cap's story is one that the audience can get invested on while still being wowed by the spectacle of it all. Captain America:The First Avenger works well for fans and non-fans alike being fun and fast paced at a time when movies demand dark and edgy stories more often than not.