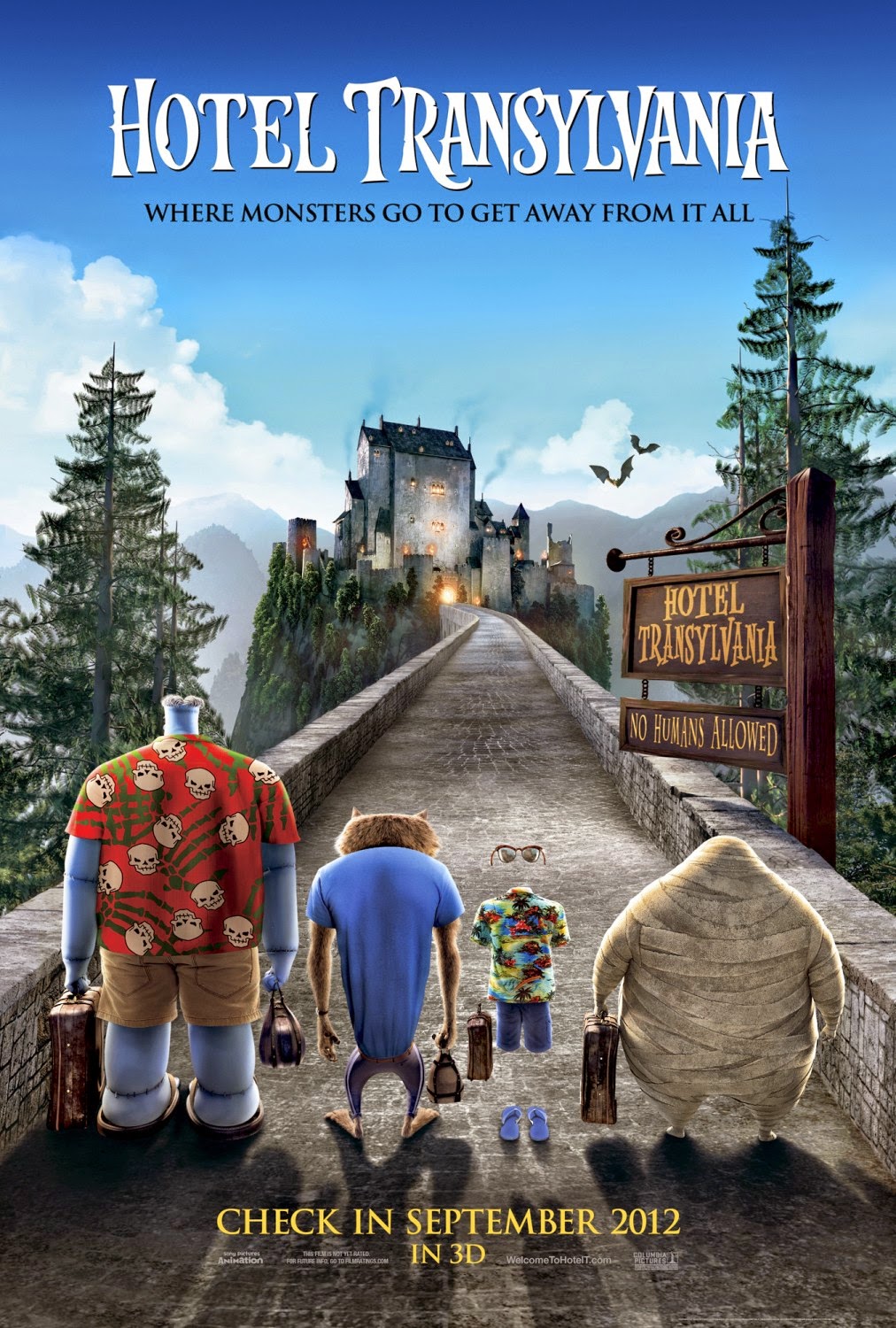 *Note-A sequel is being made, here's my thoughts on the trailer.

Synopsis- When monsters need to get away, there's only one place for them, Hotel Transylvania, run by Dracula himself. Things get out of hand when a human stumbles upon the resort, at least that's how Dracula feels, but the visiting monsters may just find new excitement in the hotel with him.


Hotel Transylvania, marks the first feature film to be directed by animator Genndy Tartakovsky, prior to this Tartakovsky, has been responsible for the creation of critically acclaimed Cartoon Network shows  (Dexter’s Laboratory, Samurai Jack, Sym-Bionic Titan) which provided the main source of interest in the film. In his feature debut, Genndy, once again proves his understanding of making entertaining animation for both children and adults, as well as just a funny comedy for anyone.

Animation-wise, this is great, comical, and quite possibly one of the best looking to date for a CG animated film, this film really captures the zany antics of short features from yesteryear, the stretchiness, the fast pace of the characters, everything is captured really well. Feeling like a true recreation of Tex Avery/classic Looney Tunes shorts, this sets a standard for all CG films attempting to capture a 2D look. The character designs are also worth mentioning, every one of the film’s characters has a simplistic look, yet provides some of the most adorable, and stand out designs for the monsters in years, even the Invisible Man who mostly appears through the sunglasses he wears, stands out by simply employing the common Tartakovsky animation quirk of having  the shape of the glasses change to reflect the mood.

The cast in this film may seem like a turn off, yet surprisingly upon watching the film they become another one of its strong points, one would expect this to never be the case with the Sandler regulars, yet any other voices for these characters might’ve killed the camaraderie felt between the characters. Adam Sandler leads the ensemble as Dracula, providing his best performance in years, despite only being a vocal role, here he is desperate to keep his daughter Mavis (voiced by Selena Gomez) from interacting with humans. The monsters show up of course in this hotel/haven to get away from humans, most noticeably the Invisible Man, Frankenstein (voice of Kevin James) his bride (voice of Fran Drescher), Werewolves, Wayne (voice Steve Buscemi) and Wanda (voice of Molly Shannon), and finally, Murray the Mummy (voice of Cee Lo Green), each providing a fun voice to their monster. Jonathan (voice of Andy Samberg) is the human who finds this elusive hotel,while at first seemingly annoying, he does have charm, not as much as the monsters, but he's fun in the role and works.

What makes this film work from a story standpoint is just how much it’s willing to embrace the simplicity, while also embracing it’s characters and overall silly tone. As the director put it, “not all animated films need to be like Pixar”, this film opted for a classic cartoon approach and fully commits to it, providing what feels like a fresh experience due to the lack of animated films that have used a classic cartoon approach in recent years. It’s a standard tale of a father needing to accept his daughter growing up and finding love, yet manages to throw a lot of old cliches out the window, or freshen them up enough to create a very entertaining comedy, the old school comedic style feels new once more, Genndy Tartakovsky proves he has talent for full length films, making his upcoming projects even more intriguing to wait for. Hotel Transylvania, may not be the deepest, most complex film in animation, but it is definitely fun film worth a watch.