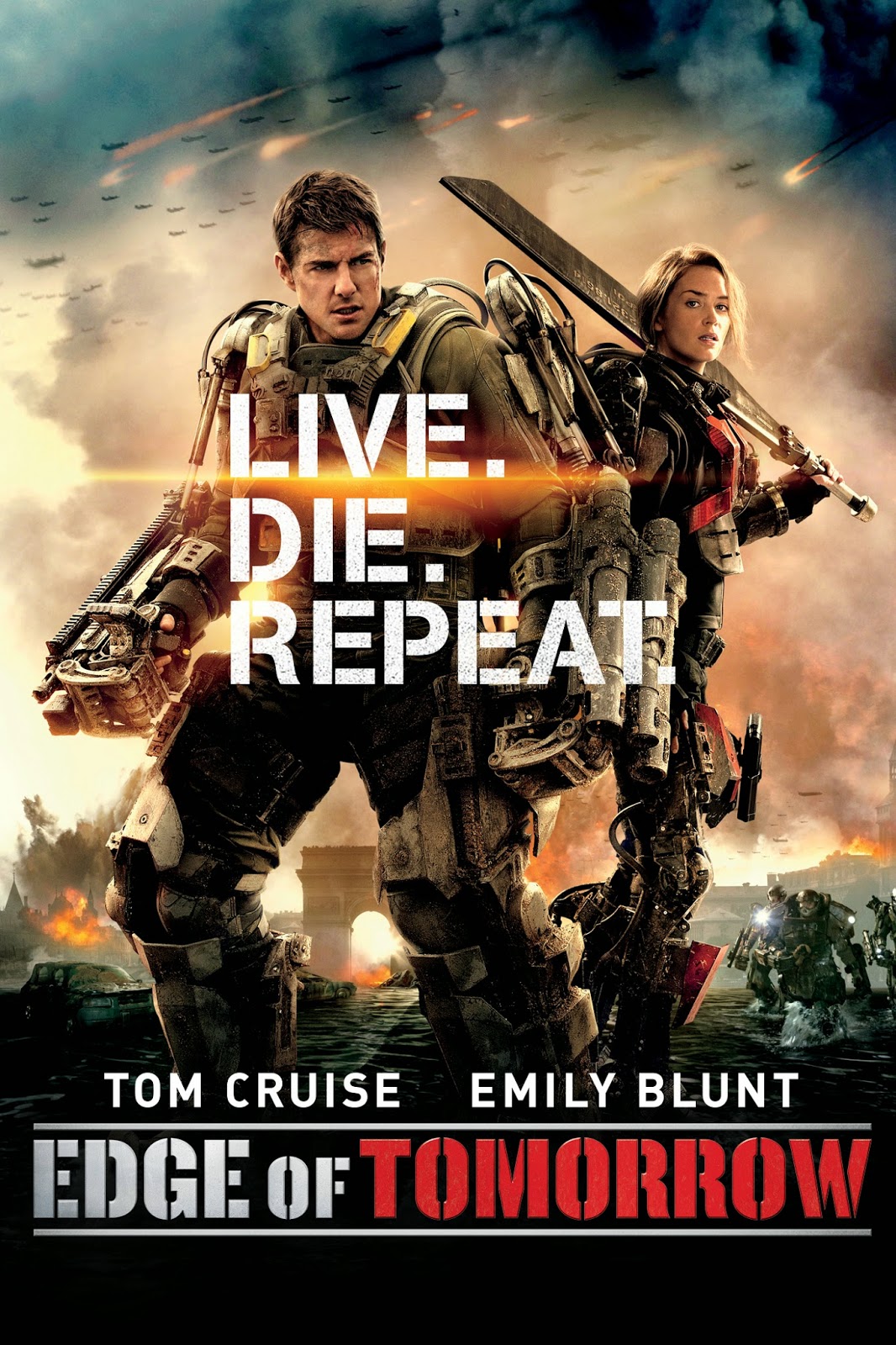 Synopsis-Based on the Japanese novel (All You Need is Kill), the film centers around William Cage(Cruise), an officer stripped of his status due to attempting to bribe his way out of a battle, forced to be a private in the war against an alien race known as mimics. Weak and useless in the battlefield, he soon stumbles upon, and acquires a secret that the mimics have been using, the power of reversing time through death. Sergent Rita Vrataski (Emily Blunt) must teach Cage to become the hero necessary to end the invasion.

Today, most people are familiar with Tom Cruise, less for his acting, and more for his real life antics. Most people will probably admit to finding the actor annoying because of this, can Tom ever prove he's got enough talent to make you forget that? Only one response is needed, Edge of Tomorrow.Unfortunately due to the film failing at the box office the film has now been re-titled Live.Die.Repeat. Despite the failure this is one great action movie.

This film makes great use of it's concept, one that most audiences will associate with the comedy classic, Groundhog Day, the "everyday is the same day" story, The key difference in this film's version of it, is that in order for the day to restart, Cruise must die, which is used for great comedic effect.While it is a Sci-fi action film,it's true strength is revealed, not in the battlefield, but in how much the humor works, not just in the ways that Cruise dies, but in the dialogue the characters share. The actors all do fine jobs in delivering the comedy, without ever making you forget that the film is about war, providing a nice light tone to the film, despite it being a bit of a dark comedy with the amount of deaths you'll see. Never shy about how silly it is, the laughs will come quicker then the action, which helps give the film it's identity to stand out amongst the typical summer fare.

This movie's best character, Rita, is one badass woman, so much so that she definitely should be considered the new standard in female roles like this. Never does the film strip her of her tough attitude, everything she does lives up to her nickname in the movie (Full Metal Bitch), to the point that one almost wants to see a story entirely focused on her in the battlefield. Blunt, never shy to commit to her role here,steals the show, making Cruise, the man who's career consists of being the best at what he does, look rather weak by comparison, we get to understand why as the film goes, truthfully though, it doesn't matter why, Blunt sells the role.

One may notice, that the mimics have hardly been brought up here, the reason is simple, they hardly appear. As far as aliens go, the Mimics have a nice design, but hardly show up to fully grasp it, at first this seems like it might be a cop out, but it isn't, because the film decides it wants to focus on it's characters, and its videogame like approach to the battle. It could've been easier to focus on the aliens, but that would've taken the film from mining the potential of it's idea, and turned it into any generic action film, this choice really helps the film rather than hinder.

Edge of Tomorrow, is simply a treat to watch, a movie that looked like a generic action film, instead came out as one of the most humorous films of last year, as well as provides great performances from both leads.