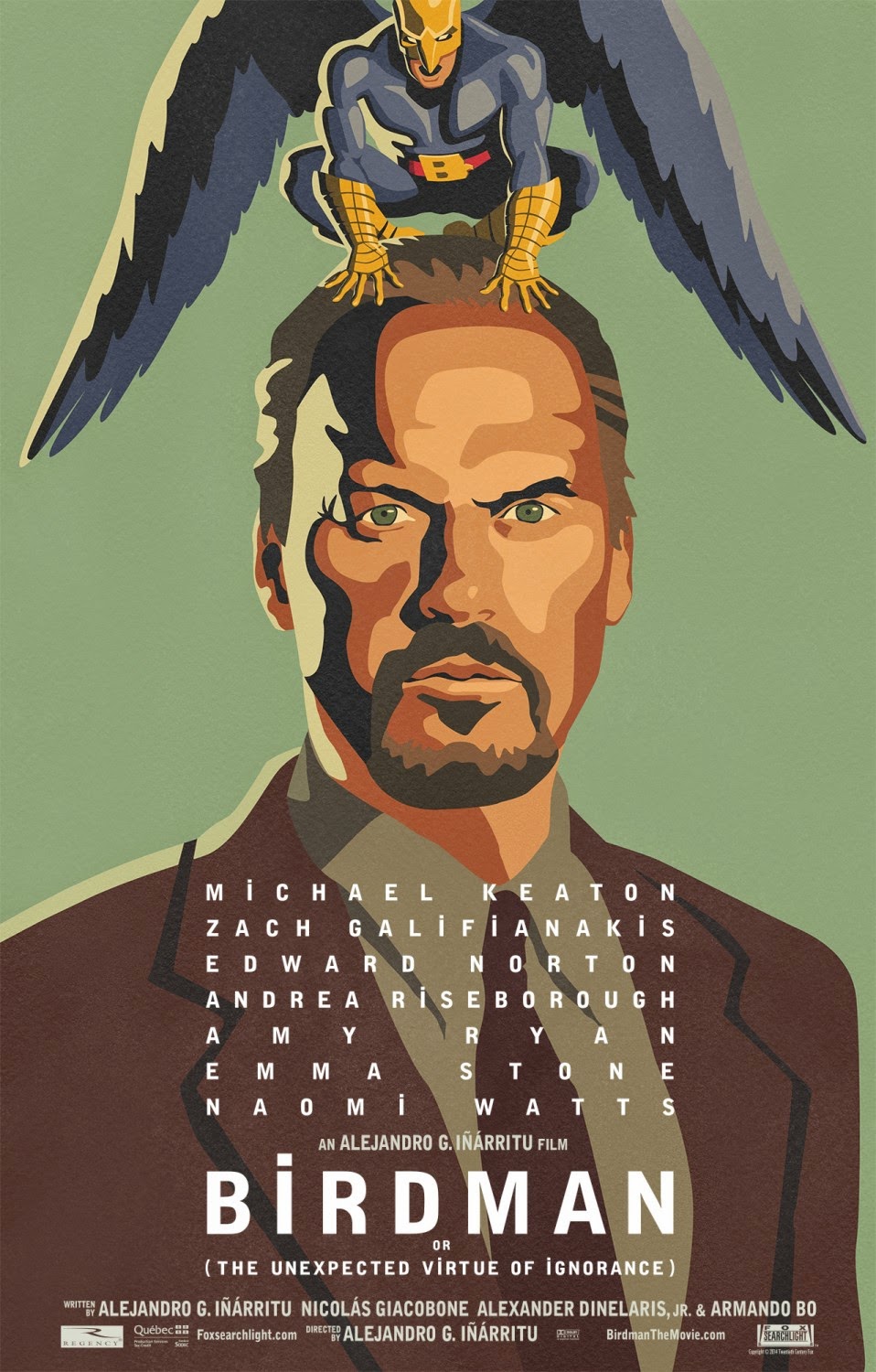 Synopsis- Former Superhero star, Riggan Thomson, is trying to make his mark on Broadway, as he struggles with a new professional actor taking his thunder, as well as his own mind.

Oscar winners are supposed to mean something grand, at least that's what society seems to want us to believe, but in truth winning an Oscar doesn't mean a thing, not just recent winners mind you, but since its conception, the little award has never meant anything, they're nice, and I would be happy to get one, but in the end they don't dictate quality. Many have won awards in the past despite not being great, or even remembered, and many will continue to win long after we're gone, so why does it matter? Possibly because we all just want to be noticed, which this film, Birdman, seems to try to make that its point, while also trying to feel unique, important, awe-inspiring, and enlightening, which all comes through, decently. It's not that it's a bad film, rather, it's an okay one that has itself believing it's so much more then that.

Michael Keaton leads as Riggan Thomson, the has-been actor who is trying to prove his relevance to the world, the character is an obvious parallel to Keaton, who most will remember as Batman during the Tim Burton era, Keaton is fantastic in the role, one of the key aspects of why this film avoids being bad, his performance is the only thing that lives up to the expectations this film now carries. Edward Norton plays Mike Shiner, an acclaimed stage actor, he's good in the role, certainly the best character Keaton bounces off of in the film, but he's not great, mostly because of the third act where his attitude seems to change, or rather becomes absent, leaving what made him so interesting before, as nothing. Emma Stone appears as Riggan's daughter, Samantha, she almost feels like a useless role beyond just explaining to her father, and the audience, why he's even bothering with the play, other than that, I could easily see how her character could've been cut, the performance isn't bad, but it's not special and the film doesn't seem to get that. Everyone else in the cast make their performances work well enough, but they aren't noteworthy.

Visually, the film looks interesting, mostly due to the choice of making it all look like a long single take. The gimmick works well, but it would've been better had the entire film gone through with it, without spoiling much, the gimmick gets cut (no pun intended) towards the end, which just feels like a disappointment to see it end when it was so close to doing it entirely. The weird things Keaton imagines are well done, but the film would've benefited from doing it more, as those are the best moments.

Birdman:Or The Unexpected Virtue of Ignorance, is a decent film, yes Keaton is amazing here, and the visual gimmick is cool, but it does leave much to be desired. Artsy is not bad, but it can be grating when it's used as a way to indulge ones own ego, which this film does, this film may be best for teens trying to get into the arts, but if you've had some experience, however small, in the field I'd say skip it.