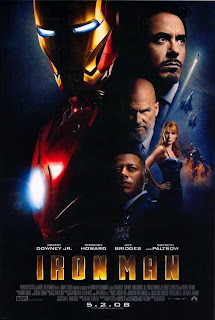 *Note-Throughout April I will be adding reviews for the movies of the MCU canon to build up to Avengers:Age of Ultron, I hope you read them all and enjoy.
Synopsis-Tony Stark is a weapons manufacturer, after being captured by terrorists he builds a suit to gain freedom, through this experience, he learns the errors of his ways. Deciding he wants to stop his weapons from falling into the wrong hands, Tony becomes Iron Man.

This was the first Marvel film to carry the Marvel Studios name on the logo, this was because Marvel had decided to take a risk in the film world by producing a cinematic universe based upon their properties. Iron Man would be the intro to not his franchise, but to a world connecting every Marvel character they own, meaning the weight riding on this single film was a heavy one.Just to even achieve their goal, the first foray into a film universe would have to be both a financial success, as well as a critical success, otherwise the whole project would've gone south, thankfully Iron Man succeeded

What made the story great in the film is that it provided something that felt different from the usual superhero film of that time, Tony's story is a redemption story that doesn't have him just becoming a hero who rescues the elderly from getting hit by a car, or cats in a tree, he redeems himself by correcting his mistakes. It provided a nice change from the usual superhero film where it's just someone becoming a hero and then saving people without a clear focus until a super villain pops out to give him a focus, this made the film feel more like a story and not just an introduction to how the hero works so that the sequel could tell an actual story.

The effects look great,  it is just simply amazing, how this still holds up compared to some recent special effects driven features. The flight scenes are where the effects are at their best, it's been said that director Jon Favreau was originally not going to use it in the actual film, thankfully because of a strong positive response from the trailers, they were implemented within the film; they look great and feel like this generation's Superman The Movie's equivalent, you can believe a man can fly again. On the other hand, the action is not the best it has its moments but it really is lacking.

Most superhero films often have performances that at best are good, but nothing too award worthy, this is not among those, Robert Downey Jr. is fantastic as Tony Stark/Iron Man, hilarious, interesting, and hard to hate, the film could have just been about Tony doing business at Stark Industries, never getting him to become Iron Man and the film would still probably be fun. Gwyneth Paltrow is great as Pepper Potts, the love interest/personal assistant for Tony, she's a nice contrast, providing a more interesting character compared to most love interests in superhero films. Jeff Bridges plays second in command to Tony Stark and eventual antagonist Obadiah Stane, providing some fun lines, great moments, and overall is a fun villain, if not entirely memorable, it would have been nice to keep him around for more, but the performance works. As for the rest of the cast, the film utilizes them well, but we would start to see better performances as the Cinematic Universe would continue

Iron Man introduced the world to the Marvel Cinematic Universe, it also showed how great it could become, even with minor weaknesses in the action department, Iron Man is a must see film.