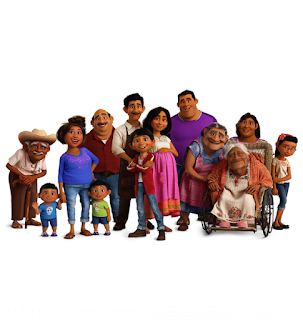 Now that we've had some time to let Coco sink in, I've decided to write about why the film managed to succeed the way it has. Fair warning, as this is a piece about the movie, not a review, you can expect to see spoilers, so please watch the movie first and then read this.

First, I wanna talk about why I'm glad that it was Pixar that made this movie, while yes, greatness can come from any studio, most western animation studios very rarely put respect into their work. What I mean by this, is that while I'm sure Dreamworks, Blue Sky, or whoever else, love their films, putting as much effort as possible to making them, they often get lazy when it comes to making their movies for all ages. Sure, Bee Movie, Rio, Minions and whatever else can be enjoyed by people of all ages, but there's no denying that they are geared more towards kids, which while not a necessarily bad thing, is why they don't garner much positive recognition as time goes on. Pixar, let alone Disney, is by no means perfect here either, but the approach is often a more accurate understanding of what "all ages" means, kids will love it, yes, but older audience members aren't being talked down to, making the experience great on both ends, rather than one sided. What truly makes it all feel respectable to me though, comes down to how the Mexican community, my people, were treated. It could have easily gone wrong in ways I don't even want to imagine, so for laughs here's a quick imaginary summary of how it would've gone wrong in the hands of a misguided studio.

IF COCO WAS MADE BY ANOTHER STUDIO
Obviously this isn't all guaranteed, as The Book of Life wasn't made by Pixar and that was a loving tribute too, but that was someone's passion project, I'm not exactly sure that this was. Under another studio, yeah, I could totally see this being a nightmarish insult without anyone passionately caring about the film and more importantly the people represented.

SO, COCO IS PERFECT?

Of course not, what film is? I mean aside from Howard the Duck, but that's another story. For me personally, this is practically a flawless story, but I fully get if people dislike the villain, I loved what was done with Ernesto de la Cruz, but I know people are tired of seeing the surprise twist villain in these movies. Also, yes, if you've seen a Pixar film before you'll see similar beats, like the journey to return home, Miguel befriending his opposite with Hector, it's practically a "greatest hits" compilation. Despite the familiarity though, I loved it, not just because the film does some new things, along with being genuinely unexpected at times (I did not see the reveal of Hector having been killed by de la Cruz coming, or his connection to Miguel), but because it understood exactly how to provide an emotionally powerful experience.

SO, IT WORKS FOR NON-LATINX/HISPANIC PEOPLE AS WELL?

YES! Of course it does. Obviously I mostly speak for myself and the reactions I've seen from people like me, but seeing online critics, most of them white (we really need more diversity everywhere), it's very apparent that the film's story is connecting with people. While I'm sure specific details won't connect with everyone, like the chancla, or seeing various Mexican celebrities, or even the fact that Miguel calls his grandparents "mama" or "papa" (can't think of another mainstream Hollywood film that ever did that), I can without a doubt say that the theme of family will connect. Realizing Hector only wants to go home to see his daughter, Coco, again is something anyone can relate too. I hate how some people will say a film featuring a non-white cast is a "black film" or an "Asian film" as if they're the only ones who will enjoy it, I've yet to hear anyone call Coco a "Mexican film" so in my book, that's a good sign that it's attracting people outside of my ethnicity, which is great. While I imagine this film will be most effective with my people, much like Wonder Woman was most effective with women and girls, as well as how Black Panther will be most effective with black people, I am grateful to see the film capture an audience outside of my community. Diversity gets stronger and more prominent when studios see it can succeed from more than one community.

DID IT REALLY NEED TO SUCCEED?

Once again, yes! It absolutely needed too. At the end of the day, yes, this is just another movie, no matter how personal it feels, no matter how much I love it, it's just another movie, life will go on, BUT! Coco failing would've left such a bad hit on not only my people, but diversity in general. I've heard some have boycotted the film for various reasons, the horribly stupid attempt to trademark Dia de Los Muertos from a few years ago, the similarity to The Book of Life and even as a screw you to John Lasseter who is among the most recent Hollywood men to be revealed as a creep (disappointment for my heroes just won't end this year will it?). All perfectly valid reasons, as yes trademarking a culture is very wrong (Sidenote, the guy who led the campaign against that worked as a consultant on the film, good until... I'll get to it shortly), sexual harassment is absolutely awful, in fact that IS the closest thing that made me want to boycott the film, while finally, despite my disagreement over the overall comparison to The Book of Life, I get it if that bothers you, personally it's the silliest reason to attack the film,but I do understand where these people come from.

From where I stand, while all reasons to stay away from the film are valid, including complaints from the LGBT community that the film's cultural consultant, Lalo Alcaraz is transphobic (possibly homophobic? I'm not sure entirely as I learned of this until after a second viewing of the film), the main takeaway if Coco failed would always be one thing. I hate admitting that, especially when you have such horrible people involved, because I honestly don't want to sound like I don't care about my fellow women, or LGBT crowds, they matter, they deserve our support, no buts allowed. Supporting this film means supporting a studio that was led by a sexual creep, supporting a studio that put a bigot in charge of consulting a film for diversity. On the other hand, as mentioned before there was only ever gonna be one takeaway if this failed, Mexican focused films are unwanted, which I imagine our orange faced, pendajo President would probably have shared his thoughts about online, because obviously. I'm not saying everyone refusing to see this is wrong, or that they support an anti-Hispanic narrative that has been incredibly visible since the election, I'm just saying from where I stand, there were no clear, positive situations, failure or success, a group would feel hurt by the end.

To those who feel hurt by the success, I truly am sorry for how these men have hurt you, or men like this have hurt you, I hope they get their comeuppance in the end, and while I failed you by supporting this film I am an ally, I do want to help as much as possible. On a personal note, I do also admit I'm not entirely ashamed by supporting this film, not because I support the monsters involved, but because I support the positivity it's brought. In both instances that I've seen the film, it brought me and a theater filled with my people to tears, we were given joy in seeing ourselves on screen, that's powerful filmmaking. No it doesn't erase the monsters, but the film empowers a group that needs it, while I don't expect everyone to separate the artists from the art, because it is impossible sometimes, the film touched me in a way few films ever have, so in that regard it's a needed experience. Still, fuck Alacaraz and Lasseter, along with the other bigots and harassers in power, they should all get their deserved punishments, not because they taint art for some of the audience, but because they have damaged the lives of people who never deserved it.

WHY DOES COCO MATTER?

One day, years from now, diversity in entertainment will be a normal thing, that's not a prediction, that's a fact, we're heading there and the worst humanity has to offer knows it, they just fear it. While any diverse film can be the tipping point, the important thing is to see many effective ones to get us closer to that day. While we've seen other loving tributes to the Mexican culture, like the most cited example, The Book of Life, Coco matters because it's touching so many, it matters because it makes a group of people relatable, special and provides an entrance into a culture that may be new to some. Despite being of a Mexican background, I didn't even celebrate Dia de Los Muertos, my parents never did either, but for the first time I feel like I ought to, that's the power of representation. Coco matters, because we, the people of Mexico/Mexican descent matter.