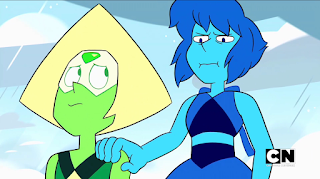 No, please, don't go...
I wanna get this out of the way now, as it's something I've brought up before, but haven't fully touched on, why does this show ignore Lapis and Peridot? There's so much they can offer to the team, yet the Gems rarely seem to call on their assistance despite the two really having no reason to ignore them. This is especially notable with this episode, it's acknowledged the two, mostly Lapis, deeply missed Steven when he was kidnapped, so why then did the two not help fight Aquamarine and Topaz? You'd think they would've been called upon, especially Lapis, considering her water abilities, but nope. Don't get me wrong, I get that some stories don't require them, or if brought in they could break the tension but at least a mention of their absence would be nice.

With that out of the way, what seems to be the point of bringing them in this time? Once again a mirror into Steven's depression. Steven, saddened by the lack of communication with Connie, decides to accept it, trying to avoid thinking about it, he answers a call from Peridot. Steven talks about his adventures, eventually talking about his encounter with the Diamonds, which leads to Lapis deciding to leave Earth. Arriving at the barn, Steven realizes that Lapis is seriously considering on leaving, with Peridot and Pumpkin going along with it, Steven objects to it but accepts that if Lapis wants to leave it's perfectly fine. Peridot reveals she can't find Pumpkin, so the three decide to look for their small friend, Steven and Peridot look on the ground, while Lapis looks from above. As they look, Peridot talks about leaving, as well as the trauma Lapis had while Steven was gone, hinting that she may not be feeling exactly the same as Lapis about the situation. Upon finding Pumpkin, who refuses to leave, Peridot decides to bring it up to Lapis, who is persistent on leaving, wanting to avoid another war. It quickly becomes clear that Peridot doesn't want to leave either, which angers Lapis, who takes the barn with her alone, leaving Peridot to rejoin Steven at home, yet another character devastated by loss of friendship.

Despite my issues with how the show has treated Lapis and Peridot, I really enjoyed this one. These are great characters, a great duo with a friendship that feels real, so it's nice to see the show acknowledge them. While having them torn apart wouldn't have been my first thought for their reappearance, it does make some sense, remember Lapis still suffers from PTSD of being stuck in a war she wanted no part in, so it's fair that she'd want to run away. This also seems to be setting the stage for the show's possible finale, which it keeps feeling like we're inching closer to. If this is truly tall for the endgame, I hope Lapis isn't kidnapped in her next appearance, rather I hope she returns like Han Solo in the original Star Wars.

With episodes like these, season 5 is shaping up to be the best, here's hoping to a continued streak of greats. Also, please use more Peridot in the next few episodes if she's living with the Gems.