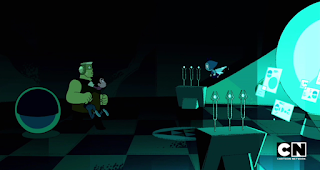 No, Lars! You don't yank the pants off of a child!

Yes, I know, this was a short break, but look, this season isn't done yet, so I'm a few episodes away from catching up, there's no reason to take a break for weeks. If there's one other reason I decided to get back on this so early, is that the last season finale caught my attention, no lie, within hours of writing my last review I decided to see the first four episodes of the season, which are all great. For today, I'm really just going into the first episode, which follows directly from the last episode.

To recap, Steven's friends were being kidnapped, turns out it was his fault, so to atone for his mistakes, he gave himself up to the Homeworld Gems, hoping it'd end the dilemma... obviously it doesn't. As this episode begins, Steven finds himself on the way towards Homeworld to answer for his mother's crimes. Proud, or at least embracing his sacrifice, Steven is shocked to learn that Lars didn't escape the previous battle, resulting in him arguing over the broken deal, Aquamarine doesn't care. As the ship continues its journey, Steven and Lars are stuck inside Topaz, who is sent to repair the ship. Steven tries formulating a plan, but Lars beats himself up emotionally, eventually leading to the two opening up about how they feel. Topaz, who up to this point has been the silent muscle, reveals that she has been bottling her emotions up, moved by the two, she decides to help them escape, despite Steven still set on sacrificing himself. Aquamarine inevitably captures them in the act, resulting in Topaz being forcibly separated into the smaller Topaz's. The episode closes with Lars and Steven separated, unsure of their fates.

I can't believe it, but Lars is actually now one of the show's most compelling characters, I am shocked to say the least. While Lars has never been awful, he has been one of the weaker reoccurring characters being a jerk more often than not for no real reason, here though, we get a much better understanding of what's his deal. I'd be lying if I said this fixed previous episodes about Lars, but it does make him so much more fascinating, leaving me curious where it all goes for him by the end of this show.

Another highlight in this episode is the eventual reveal of the kind Topaz, it's a cute scene. The brief moment of joy being ruined by Aquamarine is part of why the kind Topaz scene works so well, seeing how menacing Aquamarine can be to a big Gem is terrifying and tense, honestly I think her design and personality is based off the villain from Cats Don't Dance, if not, it's still a great character to be reminded of.

Season 5 is off to a great start, let's see where it goes.