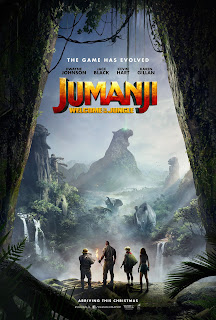 To answer your question, no, Robin Williams doesn't cameo, he's been gone (sadly) for years, I don't know how that rumor came about.
Jumanji:Welcome to the Jungle is a pretty standard adventure film, fun, but it doesn't do a whole lot that will make it memorable for years to come. That may in fact be it's biggest flaw, sure, the original film was nothing special either, but it was pretty unique, dark and interesting, it was a memorable film, I just don't see that for this film. I'm not saying it's bad mind you, it just doesn't have that extra spark that made the original well-remembered enough to reboot (or make a sequel for as there exists some small connections here). On it's own it's fun, definitely feels different from it's predecessor but it just doesn't stick all that much.

The plot this time finds the evil board game turning into a video game, adapting to what captures the interests of modern kids, which is a smart choice I'll admit. Four teens, Spencer, Martha, Fridge, and Bethany (Alex Wolff, Morgan Turner, Ser'Darius Blain and Madison Iseman, respectively) come across the game, finding themselves trapped within it as their characters. Spencer becomes strong action hero Bravestone (Dwayne Johnson), Martha becomes his female counterpart, Ruby Roundhouse (Karen Gillan) Fridge becomes the scrawny sidekick Moose Finbar (Kevin Hart) and Bethany, hilariously becomes the overweight and male, Sheldon (Jack Black) all to learn a lesson in their lives.

This is definitely a funnier film than the original, even though it's been years since I saw that, I don't think I'll be wrong there. With the kids all experiencing an out of body adventure, as well as the actors playing the roles as if they were these teens, the film lands more than a few jokes. However, I found the choice a bit odd, in the original film, Jumanji was by all means a malevolent board game, constantly wanting to kill the leads, here it just seems like it intends to teach these people a lesson in life. I'm not too bothered by the change, it just felt off.

There are two areas I felt this movie could've been better, both of which probably would've improved the overall film. The video game aspect, while funny and certainly a good attempt at satirizing the art form, ends up taking a backseat as the film goes along, which is a shame because at first it seemed like it'd be smarter. We see a sexualized woman, obviously mocking how games portray them, but it is hardly brought up as things go along. There's a hilarious running joke about the one dimensional NPC's, but they never go farther than acknowledging NPC's having few pieces of dialogue. The villain is one dimensional, which is fitting, but again it's not really acknowledged, even though you'd think someone would mention that he's hardly got any motivation.

The second area this could've been better is with the characters becoming more like their avatars in the game. There's hints of it, with characters occasionally talking, acting, or reacting as their character bio suggests, but aside from a few jokes it never amounts to much for anyone, except Kevin Hart's character. Honestly, if the game had used it in a way to complicate the goal, making the leads act against their will at times, it could've made things interesting.

I hope I don't sound too negative here, Jumanji:Welcome to the Jungle is a fun film, I recommend it, it's just also standard when all is said and done. If you're looking for a fun adventure movie, this is certainly gonna satisfy you, it's funny, well acted and the effects are pretty cool overall, I can't say it's better or worse than the original though, if I'm being honest. It is however worth watching, which is good news for fans. I'm probably being nice to this, but it doesn't do a whole lot wrong, so nice seems right.