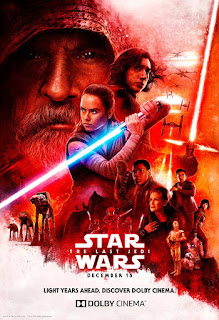 
The first Star Wars film I saw in a theater was Episode III, while it certainly isn't anywhere near the best in the franchise, I can't say it didn't feel amazing sitting in a theater for a Star Wars film. Now, after having seen a few more, I can't say I've ever felt as I amazed as I was at the age of eleven, it's a feeling that just can't be replicated, even if the recent films are all superior you can't replicate the feeling of the first time. Star Wars Episode XIII:The Last Jedi couldn't bring me back to that exact feeling, but it did impress me, in fact continues to impress me as I think about it. I didn't know where it was heading, nor do I know where the franchise goes next, that's a feeling that's better than experiencing a franchise for the first time on the big screen, because it makes the story I'm watching feel confident in telling me things I won't expect.

Just to to make things clear, I am not spoiling this film, but if you want to go in as fresh as possible I do recommend you bookmark this page and read this after you see the film. I never expected for an Earth shattering twist, which we don't actually get, but the twists and turns this story takes is impressive and probably the riskiest any franchise film has been in quite some time, yes even riskier than Thor:Ragnarok which also was confident in throwing conventions out the window. It may not be "I am your father" shocking, but if you expected this to play the greatest hits like The Force Awakens did, you will be pleasantly surprised.

Picking up where the last film ended, we find Rey (Daisy Ridley) with Luke (Mark Hamill), the titular last jedi, who now wants nothing but peace. Rey is there in hopes of turning the tide against the evil First Order, led by Snoke (Andy Serkis). As this is going on, the Resistance, led by General Leia (Carrie Fisher) is trying to escape the First Order, despite the plan to run, young pilot Poe Dameron (Oscar Isaac) wants to attack, playing by his own rules. Along the way, Finn (John Boyega) and a maintence resistance member, Rose (Kelly Marie Tran) embark on their own adventure to save the Resistance. It's a race for survival as Rey's power grows, while Kylo Ren (Adam Driver) deals with his conflicted feelings.

If this plot sounds busy, that's because it is, the film does suffer a bit because of so much going on in so little time, but the eventual pay off in everything is absolutely worth it. This movie is very much about our nostalgia for this franchise, it critiques it in a way, while we certainly find similarities and homages to the past, it never devolves into fan service. Because the film is acknowledging our expectations, we progress through a story that not only pulls the rug underneath us, it almost feels like it's standing up with a pair of middle fingers at our theories or obsessions over certain mysteries. It's pretty amazing to see a modern franchise film take bold risks like that, we're not being given what we expect or want, because the film is confident to give us something we deserve, an unexpected piece of art that challenges our preconceived expectations.

While it's certainly amazing to see great performances from the veterans, with Carrie Fisher being given a lot of great moments (I practically cried in a scene that feels stronger now that she's gone) and Mark Hamill giving his best performance of the franchise, I was more amazed by the new cast. While this film certainly has plenty for the original actors to do (in fact, Luke has my favorite scene in the film, not spoiling it though), the new cast get to truly shine here. While The Force Awakens certainly made good use of Rey, Finn and Poe, I do feel like it relied a bit much on the original cast passing the torch to the new cast. This time, we get to see these characters drive the adventure, providing both a fun time and a diverse set of heroes for the kids being introduced to the franchise with this. Again, I love the performances of the veterans, but I do appreciate the franchise being more confident on letting the new heroes take the lead, especially now with Fisher's passing leaving the franchise without another veteran to lead the new actors (is it even a spoiler anymore that Han died in the last episode?).

At the end of the day, what impresses me most about this film, which you've probably picked up by this point, is it's confidence in doing it's own thing. The new characters and plot details aren't just repeats of classic Star Wars stuff, they feel like their own things; if they are just repeating, then the film isn't afraid to say "nah, forget it, we're not doing this again". I know I've made this sentiment already, but it truly is impressive for a franchise like this to pretty much trash everything you're expecting this to do.

While it's not perfect, with the film going a bit too long mainly, the payoff is just too rewarding to ignore. While Empire Strikes Back will remain the better film, it's safe to say The Last Jedi is the gold standard for the new movies. While I don't expect this to change anything, I do hope more franchises look at this as an example of how stories can grow, while throwing away our expectations for them. You'll probably watch it anyway, or have already seen it, but I still highly recommend this film, especially on a big screen for all the beautiful details.