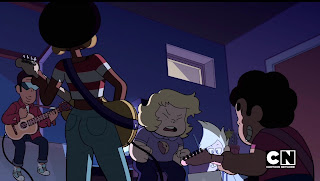 So does anyone even run the donut shop? Like is there even a manager???

So this arc is pretty much closed at this point, yes I know there's one more episode, but Steven is pretty much back to normal, which sounds about right. More like a break than an actual penultimate episode, the exploration of other characters feeling loss of a close friend continues here. I say break, because there really is so little continuation of the ongoing story here, sure, it is nice to see Sadie saddened by the loss of Lars, but the episode is more focused on her work stress than her feelings of loss. It's not an odd choice I must say, but I wish the episode lingered a little more on her feelings on Lars, rather than just being another episode about her being more honest about herself.

As the episode begins we see Steven at the donut shop, doing a food run for his band with the cool teens. Sadie, now alone at work, expresses how tired she's been since Lars left, pulling double duty to keep the place running. During a band meeting, a not so successful one where the group hasn't found a sound for a performance, leads to Sadie providing a fun time with her collection of old horror films. As the movies play, the group begins jamming to the score, leading to Sadie singing (wait, is this the first song of this season? I think it might be) which turns out to be a pretty cool tune. Sadly, Sadie reports her work duties, leading to the group struggling without a sound once again. Of course, being a show, the episode ends optimistically with Sadie quitting to join the band full time.

This is another cute episode without much substance, fine but I'm ready to move on from this theme. Sadie letting go of her job, once again hints at the possibility of the show's ending coming sooner than later, with her arc seemingly complete, which is fine, she's a good character who interacts with the cool teens better than Lars, both in the context of the show and outside. I have no real issue that the show wants to explore ideas with less weight every now and then, however, the opportunities provided for a story with more weight, which feels pretty disappointing when thinking about it. Still, the interactions are fine, while the song number is a cool unique tune for the show, so it's not bad, just an adventure I won't remember much after a few episodes.

One more episode and I'm caught up, I'll have some things to say when that happens. For now, if you feel like skipping an episode just to get to the point, this is one you can avoid watching, it's not bad just not mandatory viewing, or entertaining enough to feel like such.