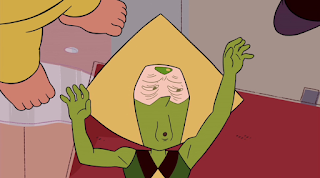 Peridot, what you're feeling is called heartbreak.
And we move closer to the make up point right? After a few episodes of Steven mentioning how much he missed Connie, there's no (at least from what I remember) mention here. Obviously in part it's because Peridot misses Lapis after the last episode, but I also feel it's because the show knows that in order for Steven to relax he must be distracted. Personally, I've found my own depression is solved when I feel I'm helping others with their own issues, which is perhaps the point here, for Steven to move from sadness he must acknowledge the problems of others. Seeing how someone else deals with the loss of a close one is sometimes how we deal with it.

Distraught over Lapis, Peridot is alone in the bathroom yet again. Amethyst, tired of the scene, decides that she and Steven should go to the Kindergarten to make Peridot feel better. After a few exchanges in conversation, Peridot notices a flower is growing there, proof that life has returned to the land. The trio decide to plant some more flowers, wanting to spruce up the place, providing Peridot with a new purpose. A day goes by and it turns out that the flowers have all died, confused and angered, Peridot attacks the original flower, only for it to be revealed to be a corrupted Gem. As the three go home, Peridot once again feeling defeated, finally sees the road in front of them, realizing life still exists, even if not on some land, at least it's proof that life can go on.

This is probably the weakest episode of the season, but it's still incredibly cute and entertaining. I like that we see Peridot's hobby of farming here, it's an aspect we haven't gotten enough of, which is strange because the show has had plenty opportunities to do so. The issue though, is that there really isn't much to dig into during this episode, the emotion isn't very heavy, even though it feels like it should be. It's pretty much a standard laid back episode, which is fine, but as the episode where it feels like the arc is beginning to set the resolution in motion? It's doesn't hit enough key notes to truly succeed.

It's an average episode, but it's cute and does it's job well enough. I'd prefer a more emotional episode to start the end of this break up arc, but we still have a decent story to see.