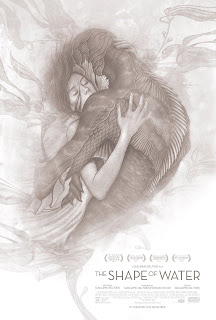 As said before, this movie is pretty much a variation of the classic love story Disney has now brought to life twice, so I won't delve too much into the plot. Elisa (Sally Hawkins) is a mute janitor, as well as our "Beauty" in this story, an interesting change as that means she's an outcast, but not because she has "different" interests, like in most takes of this story. The creature of her affection is a humanoid amphibian, known only as the Amphibian Man (Doug Jones), he's held captive in the facility Elisa works in, for what exactly is not clear, but we know the U.S. assumes he can provide an edge on the Space Race against Russia. With the help of her friends, Elisa believes she can set the creature free, before Colonel Richard Strickland (Michael Shannon) can dissect him.

For starters, yes it's very beautiful. It has to be, Guillermo del Toro is the among the best in the business when it comes to his sets. The 60's is beautifully recreated, while the facility is fascinating to look at. This is a beautiful film to look at, there was really no question there, it's among the best, if not the best looking film all year.

Of course the main reason you're even watching the film is to see a beautiful romance, which is what you get. Sally Hawkins is terrific as this mute girl, she sells the performance, which is great because it is hard to make a convincing beastiality romance, but along with the performance captured by Doug Jones as the creature, it is believable. There are plenty of things that make it work, but if there's one thing I'd have to point as to why it does, it's that we see how broken the two are. Both leads can not speak normally, so it's an obstacle they overcome to complete each other, which is lovely to witness. Most stories of these kinds have the "Beast" character acting cruel to our lead, slowly becoming kinder, which is fine, but it is refreshing to see the love between our leads birthed from kindness, not eventual kindness, just general kindness. So if you were looking for a film that reminds you of what being romantic is, you've found it.

The Shape of Water is a wonderful film, whether it's the lovely music, the dance scenes that put last year's La La Land to shame, or the romance, you just can't go wrong with this. It's got great performances all throughout, especially Michael Shannon and Sally Hawkins, who deserve at the least nominations for their roles here, but I sincerely hope they even win some awards for their work here. If you haven't figured it out yet, yes, you definitely need to watch this one, you'll regret it if you miss this one in theaters.