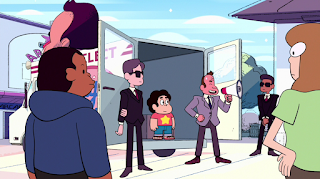 Hey Steven, next time, maybe think about your choices bud.
Well I'm impressed, after a pretty amazing arc, Steven's return to Earth ends up having ramifications, which is interesting. Not that the show hasn't explored the idea of regret and one's mistakes of the past, but seeing Steven of all people, not realizing his own faults, that's something we haven't really touched upon. This seems to be the new arc, Steven, having returned home, must face the consequences of trying to be some kind of a martyr for his friends, and I'm curious to see where it goes.

Steven is finally safe at home, but we see a changed outlook from his friends and family after his latest adventure. Greg and the Gems seem to be completely observant, seemingly afraid to let Steven leave their sight, while Connie just looks away from Steven. As Steven talks a bit about what happened, Connie decides to call out Steven for his poor decisions, leaving him alone as Lion decides to part ways as well. The next morning fares no better for Steven, as he provides the new of Lars to Sadie, completely worried, she decides to accompany Steven to inform Lars' parents of what's gone on. Along the way, the two find Nanefua, the mother of the Pizza shop owner, giving a speech out to the citizens of Beach City, angered by the Mayor's lack of action to stop the kidnappings. As Sadie leaves to talk to Lars' parents, Steven instead goes to Mayor Dewey, deciding to help him keep his job. Steven's desperation to help anyone leads to Dewey being poorly prepared for a debate against Nanefua. After Nanefua speaks, Dewey decides he can't compete against a more competent leader, realizing it's better to accept defeat, rather than prolong the inevitable, Dewey, steps down. Steven dislikes the choice, trying to explain how a win may be possible, until he realizes that his devotion to the campaign is more about trying to correct his failures with Connie. We end with messages being sent to Connie, who seems to be out of the picture for now.

This is a fantastic follow-up to the last arc, sure forgiveness is bound to happen, but I like the show acknowledging that some choices are just too much to ignore. Steven's understanding of feelings was not weighed into his choices, thus he must face the consequences, much like how Mayor Dewey's lack of action is finally catching up to him leading to an interesting pairing. I like how Dewey's resolution is accepting he's not as fit for the job as he assumed, it's a nice way to get Steven's arc of understanding his mistakes going, as well as a good parallel.

It's hard to say whether or not devoting a few episodes to Connie leaving Steven is a good idea, but I am glad to see the show take that risk. How often are our heroes ever question for their choices? Especially in kid shows? It's exactly that element that has me curious to see what comes next.