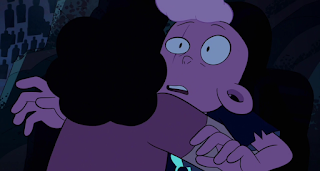 So Lars dying was an unexpected event, but now that we know Steven can revive others I feel a little iffy on things. We know death is a threat, but if Steven can revive people is there much to fear? I'm sure the show will continue to have major stakes, don't get me wrong, but one thing that makes everything feel a little less threatening is the knowledge that death is no longer a threat. Of course that's so long as Steven is alive, so maybe it won't be affected much, but it's worth considering. My general point being, after this revelation, as well as everything else that's gone on, this show absolutely needs to wrap up this season or next if it wants to end on a high note.

I'm getting ahead of myself though, let's talk about this episode. Lars has just been revived a happy but confusing moment for Steven and the Off-Colors. Lars tries understanding what's going on, but having a new skin color, a lack of interest in food and water as well as a new ability is not the easiest thing to understand at all. Unsurprisingly, Lars can now transport Steven to Earth, via his hair, similar to Lion's mane (by the way, I love Steven acknowledging Lion's death). As the realization is made, all the Off-Colors want to go to Earth, until it's realized that Lars can't go to Earth, as his head is a portal, leaving him trapped until a ship can take him. Lars decides to stay behind, along with the Off-Colors, but it's decided that Steven must go home, to let everyone know what's going on, thus closing our episode with Steven's reunion with his family.

It's pretty clear that Lars is the MVP in this arc, as we see him grow into one of the best characters of the show. While this doesn't exactly make past appearances of Lars more likable, I do like seeing the show make him so selfless after such a crazy event, it was a necessary change for the character, so it's nice to see justice done to the character. Lars was never a bad character, but he was one that just never fit with the cast all too well, which was probably the point, as only after losing everything, even his life, Lars has become an admirable character for the show. He's not sure of what's going on, but he knows something right needs to be done, a lack of characters who make him fear for his social status has finally allowed him to be a great part of the cast.

I'm not sure where this show is heading, or how long it plans to get there, but for now it's among the most interesting shows for children currently running. I just hope my guess of where the ending can be expected isn't wrong, because no one likes seeing things go longer than they should.