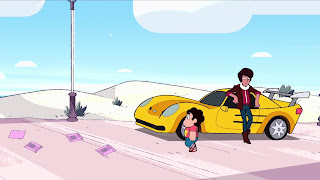 Get the HELL out of here Kevin!

Well, it's finally here, the day I'm caught up on Steven Universe, I'd like to say I'm proud, but I'm more amused than anything. Why amused? Well, by some cosmic coincidence the last episode I see of this show (at least until new episodes are actually released) is an episode with plenty of Kevin, in my opinion the worst character of the show. It's funny really, the previous episode featured cool characters that are fun to see and actually unique, here we have Kevin, the shows more basic and cliched "cool" character. Maybe I'm too harsh on this character, but I don't really care, he's never been fun to watch; I wish he were more like Gaston, or other conceded characters, maybe then he'd be fun to watch, but he's so bland, boring and basic as a jerk.

The episode begins with Steven, finally realizing Lion had been gone for some time I suppose, putting up lost posters for Lion. Kevin, ever the arrogant guy, drives up to him with an invite to his party, specifically because he admits that Stevonnie is the coolest person around. Steven declines, until it's revealed Connie agreed to attend, thus setting the arc's ending in motion. Once there, Steven realizes Connie is there, with Lion, leading to Kevin expecting Stevonnie, but as Steven soon points out, they haven't talked in a while making the expectation turn into desperation. Kevin, being the self-centered jerk that he is, suggests Steven ignore Connie, try to look cool and do all the insufferable things Kevin thinks is cool, so obviously it backfires. Things still end up being okay though, Connie talks with Steven, feelings are explained, apologies are made and Kevin is disappointed when they refuse to fuse there, ending our episode with Kevin being rightly mocked.

It's fine, I think the arc ended weaker than it started, but it worked overall. Kevin's existence still sucks joy out of this, but his appearance here works well enough to just wrap things up. There's some charming laughs to have, especially considering the characters we're working with, but as expected, when you make an episode with a character that feels very cliched, you get a less interesting episode, which is a shame because it should've landed more emotionally resonant. I guess I didn't regret watching this arc, nor does this erase the strengths in the arc, but there should've been a stronger payoff for this story.

Well I'm caught up, so that means you won't see another review until we get another episode. It's been a fun ride, though one with disappointments, but I enjoyed it and I look forward to watching more.

So what's next? Well next month is January, so January of Suck 3 will take up the month, after that though I'll be reviewing the short-lived animated series The Critic. Along the way expect a video on Steven Universe, as well as a few other videos, I hope you enjoy that.