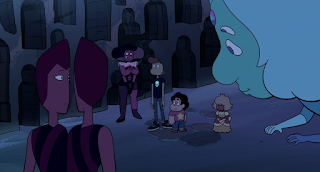 I have a wonderful prediction, someone clicked the link to this review.

Once again, the story picks up where we last left off. Steven and Lars escape the trial, stranded on Homeworld, the two must find a way to escape. After an encounter with some drones (at what point did that dinosaur movie say that all things lose sight of none moving objects, Lars?) the two meet a two head/body Gem, Rutile, who introduces them to the other outcast Gems, known as the Off-colors. This team includes leader and multi-fusion Gem, Fluorite, the nervous wreck fusion, Rhodonite, and "future"(actually past) vision Padparadscha forming a pretty cool new team to see. We learn a bit more about what exactly is hated by Homeworld, despite most of it being obvious from early episodes, but it's all good to see in Homeworld. After a drone attacks, Lars realizes he may be the perfect shield, as his Gemless body is undetectable (funny design flaw ain't it?) though this victory is cut short when Lars ends up dying in the action. A sad ending, but what's surprising here is that the show finally reveals how far Rose's/Steven's healing powers go, which should've been obvious the second Lion's connection to Rose became clear.

It's not as good as the previous episode, but make no mistake, as we inch closer to the end of this four part episode, I'm honestly impressed by everything that goes on here. We get a reveal that yes, even on Homeworld not all Gems serve the Diamonds, those that don't have a small secret society, which I assume will grow as the show goes along. I'd also like to point out that the Off-colors are great new characters, funny, silly, but very reminiscent of outcasts found in various classic animation material, I honestly got both an anime and Don Bluth feel out of them.

And then there's Lars, who's gone from one of the least interesting reoccurring characters, to among the most interesting here. I'll hold some talk on him back, at least for stuff to say next time, but suffice to say, selfless Lars is far more interesting than selfish Lars. I like that without society he can now admit his shortcomings, he is willing to fight, he's doing plenty that he wouldn't have done before, which I know was his growth as a character, but it is sad knowing it had to take this long to happen.

Another great episode, now let's get to the last part.