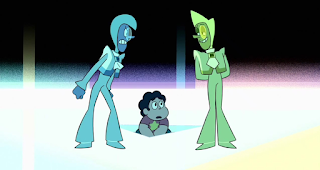 Mr.Universe goes to Homeworld.
Just as we get to the second episode of the season, we already have a contender for best episode of the season, as well as one of the best episodes of the show. While at first glance one might assume this may be a boring episode, after all a court case in a show aimed at children is hardly an exciting idea, it ends up being one of the show's most intense. Nothing is really solved, but one can see the puzzle pieces falling into place, if this isn't the final season, the next has to be.

Once again picking up where we last left off, Steven awaits his punishment for his mother's crimes. Just as he begins to get antsy about getting it over with, a new Gem, a Zircon appears, revealing herself to be his lawyer. With everything in place the trial begins, with Yellow Diamond eager to just shatter Steven, Blue rules against this though, preferring due process. The opposing Zircon (Yellow Zircon) provides ample evidence of Steven's/Rose's guilt, including a cameo of Eyeball, who we last saw trying to murder Steven, nice payoff really. Just as Steven's Blue Zircon tries to make a counter-argument, Steven interrupts, claiming he did it just so Lars can go back home. As he explains his story, Blue Diamond finds holes in his version, leading to her crying and a recess being set. Blue Zircon, confused and outraged by Steven's choice to admit guilt, begins finding holes in the story too, presenting this to the Diamonds leads to an upset Yellow Diamond, even more so once it's pointed out that all evidence suggests a Diamond maybe killed Pink Diamond, not Rose. In the ensuing rage of Yellow, Steven and Lars escape, finding themselves in Homeworld, as Yellow Diamond threatens to destroy them.

Again, this is one epic episode, intense and so satisfying, it's safe to say this will be a highlight of the season. Props to Amy Sedaris who is great in the role of the two Zircons, whether she was nervous and desperate as the Blue, or smug, cocky and an obvious kiss ass while playing Yellow, Sedaris is a ton of fun here. Then there's Yellow Diamond, while she's certainly been threatening in all appearances, seeing her here impatiently trying to end the trial, eventually devolving into full on madness as we inch closer to what seems to be a pretty obvious reveal at this point, is among the show's most fascinating progressions of a character. If Yellow Diamond isn't the true culprit behind the crime I'd be surprised. All this as we get some neat visuals of a Gem court make this an especially memorable episode, I've already seen it multiple times to back up how much I enjoyed it.

While the season isn't even halfway done, we already have a contender for best episode of the season. As we inch closer to what may be the end of the show, Steven Universe is setting the stage for an incredibly tense and personal season, highly recommended.