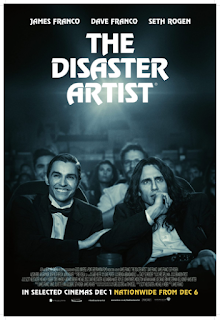 If you're a devotee of The Room, please don't repeat the lines in the film throughout the screenings of this film, it's really not cute.


I'll be upfront, this is one of the movies I've been looking forward to all year. James Franco as Tommy Wiseau, a look into the making of one of the most well known "so bad it's good" movies, from the team responsible for comedy classics like This is the End, how could I not want this? Well as it turns out, it's not the home run I expected, but it's still a pretty good movie.

I'm no hardcore fan of The Room, that's the other thing I must address, sure I find all the bits funny, you know which ones, but I've never dedicated a huge part of my film viewing life to it. I bring that up because it may in fact be part of the problem, or strength depending on the viewer. As far as bad movies I enjoy laughing at goes, The Room is middle of the road for me, it's funny yes, but it's a dull, long sit through at various points, I honestly laughed more at this year's well made, but stupidly written The Book of Henry. I'll admit this perspective is one that's specific to me, so I understand for others it's a much funnier film, for those people you really don't need my opinion, you are gonna love this.

So what's it about? Well as mentioned before, it's about the making of The Room, one of the most infamously bad films ever made. James Franco stars as Tommy Wiseau, while younger brother Dave Franco stars as Greg Sestero, two aspiring actors in L.A. Who get together to create a film, written, directed, produced and starring Wiseau. As we come to learn, both struggle early in their lives for different reasons, Sestero for being a decent looking nobody with little talent, which is restrained due to stage fright, while Wiseau struggles because he is just too weird to function as a hero, despite desperately wanting to be a hero. Along the way we learn a bit about the people involved in the making of this bizarre film, but in the end it's about these two friends, both dreaming for something better, despite there being no real potential there.

Let's get the best thing out of the way, yes, James Franco is the best part of this movie, which is a big reason why it all ties together. Tommy Wiseau is widely known to have given one of the worst performances with The Room, seeing someone replicate it, not just for re-enactments, but for an entire three-act story, that's fascinating. Franco sells the hilarious oddball aspect perfectly, but he's also great when we see just how much of a monster he is on set, we even feel a bit bad for him at times. While I'm sure this film will collect plenty of award nominations, the only one I can agree on it deserving, even winning, it's for Franco's performance, there's a lot of charm there, even if it may get ruined by hardcore fans of The Room laughing at just about anything coming out of his mouth, even the things that are supposed to be more emotional.

The rest of the cast is mostly serviceable, good yes, but there's hardly any real impact left by everyone. Dave Franco is fine as Greg, but he's mostly here to react and sort of apologize for Wiseau's antics, making for a pretty blank character. Credit where it's due though, Dave is great once he starts realizing Wiseau has screwed him over, the downside there being that it's not until the third act, so it takes a while. The only other actor that left any kind of impact on me is Seth Rogen, he plays the script supervisor on the film, Sandy Schklair. While it may be because Rogen and Franco clearly have a great bond by this point, any time we see Rogen upset, confused, or just speaking against the production, it felt authentic and made me wish the film presented more of that. Outside of those two, it's like I said, serviceable, the actors who play the actors on The Room are fine (okay, Zac Efron also earns a big laugh, but it's a cameo at best), but we mostly just see them re-enact bits of the movie, which is fine, but I would've preferred a few more on set reactions from them. The behind the scenes people get a few scenes, which earns a few laughs, but again it's all in service to re-enact fan favorite scenes, though with reactions that best sum up as "wait, what just happened?" It's fine, just wish there were more, like seeing how upsetting the conditions were, which the film touches upon late into the look of the shooting. The weakest aspect though, is Allison Brie as Amber, Sestero's then girlfriend, make no mistake, I think Brie is great and I've loved her work since Community, but there's so little to her part here that she barely registers, which is a shame because her relationship with Dave as Sestero had potential to be something more interesting.

In terms of the re-enactment aspect of this film, it's all well done, which is showcased during a best of collection found in the film's ending. Despite that, I found the film to be strongest when we see the production on set, we've heard of nightmare scenarios when filming certain movies, in fact speaking from some small stuff I've done I can name a few too. Seeing this to the end, I do wish that some things were trimmed, or at least re-worked so that we could see more of how awful a person Wiseau was on set. Seeing that awfulness play out is also a part of the problem for the film's ending, I'm not sure of the accuracy, maybe people really did laugh that much during the premiere, but seeing the cast and crew, who we see having been badly treated and given the tiniest of respect on set start to cheer right away just felt odd, again maybe it's true, but celebrating a royally bad film still seems off when you had been treated so poorly on set. Still, there's a lot to enjoy in seeing James Franco act like a narcissistic moron, unaware, or uncaring in how others view his antics, I just wish it were addressed more.

The Disaster Artist won't change your life, but it's a fun look into the production of an awful movie. I enjoyed seeing the movie play similar beats to biopics about actual good things, which I hope was an intentional choice, as the idea of similar scenarios of geniuses (struggles in life, lack of belief/opportunities, risks, downward spirals, etc.) happening to people who produce disastrous works of fiction is hilarious when you think on it. It's not perfect, in fact I only highly recommend it to fans of The Room, but to everyone else it's still a good watch for James Franco's performance.