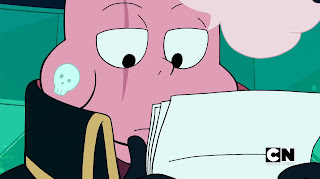 And time to end our latest batch of episodes with... a clip show.
Okay so that’s actually harsh, this episode isn’t actually a clip show, but it also doesn’t advance the story all that much. I’d probably be more okay with this episode if it followed the 13th episode, it after a long break, it really is disappointing that this caps off the latest group of new episodes. To be clear, this is a cute episode, as well as one that I think needed to be done, even though I’d prefer the episode if it were made up of letters from various characters rather than just Steven. My issue is that it feels lackluster that after four episodes, we’re still exactly where we left off in January.

This time around we continue with Lars in space, only instead Steven has sent a letter to explain what’s gone on in his absence. This gives the episode an excuse to showcase a series of clips, all of which have their own charm, as well as showcase what EX-mayor Dewey is now up to. It’s cute and resolves in a very sentimental reveal, but by the end no amount of funny moments (that’s right, Peridot and Lars haven't met) can hide how useless these new episodes will feel like once we see Lars get home.

We could’ve had an episode about Steven bringing Pearl and Peridot to help fix the ship, or maybe the crew having to get fuel in a dangerous world, just progress us. As I’ve said before, I like seeing story arcs, I also like seeing episodes that are self-contained stories with no plot connection to other episodes, but you can’t do both at the same time. Seeing the show come back with little progress just feels upsetting, it hurts this episode which is otherwise fun.

Well the show’s taking a break again, hopefully the next few episodes don’t lag, but thinking on this one, it’s good but disappointing, which unfortunately has become the norm for this show consistently.