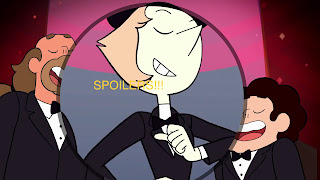 Yup, I’ve stumbled upon some juicy Steven Universe leaks, this season is the last and a movie will officially end the show, I can’t believe it but it’s true.
I always figured we were nearing the end of the show, but in a recently leaked video it was confirmed, season 5 is the last, but don’t treat it as an official finale, that’s what the movie (presumably titled, Conquest of the Diamonds) will be for.

So what was learned in this leak? Season 5 will have a four part season finale, with the episode before these four setting up the main conflict, the return of Rose.

You read that right, Rose will return. In the 22nd episode of the season, the Gems will look for an ancient Gem artifact, it’s power will remain a mystery until the very next episode, the beginning of the season finale. Steven will use said artifact on himself, revealing it’s a weapon designed to separate Gems and their physical forms. Normally this would kill a Gem, but since Steven is part human it just removes all Gem qualities from him, leading to his Gem becoming Rose again, which will be the heart of the finale’s epic story.

How exactly each episode plays out is a mystery, but in the leaks we did get some details of what to expect, which are as follows.

That sounds like a lot, though I have to wonder how much of it will be a part of the finale, as the leak suggests some bits (mainly the wedding) will be their own episode, so maybe some of these happen before the four parter? I’m especially interested in the movie, will it hit theaters? Or be a TV movie? My guess is that it depends on whether or not Teen Titans Go To The Movies succeeds, but I could be wrong.

In any case if you want to judge on your own, here’s the clip of the leaked information, enjoy.