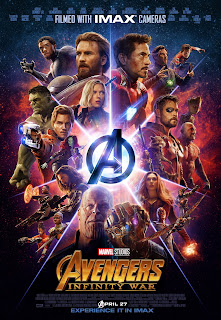 
I... I don’t know what to say, I got out of this just a few hours ago and I’m still shaking. As I mentioned above, I will not be doing any spoilers, but damn do I want to talk about what I just witnessed. 10 years ago the Marvel Cinematic Universe kicked off with Iron Man, a film that impressed me back then with it’s promise and a film that never prepared me for how invested I’d be in the universe a decade later. Avengers:Infinity War is not the promise made by that first film, nor is it the promise of the first Avengers, it is a surprise I somehow did not see coming.

If you’ve somehow missed all the ads to this, including the movies building up to this moment, don’t worry the movie is pretty straightforward. Obviously some things will be lost on newcomers, but it is essentially a movie about a bad guy trying to defeat the good guys so he can get what he wants, the twist is that we follow the bad guy in this movie. Not the most unique idea, but Thanos ends up becoming a fascinating character the more we learn from him, relax believers of the Marvel villain problem, Josh Brolin’s performance is deeply traumatic and satisfying.

Perhaps the most amazing thing in this film is just that it works. There are so many characters that it’s easy to lose track of who’s where and why, but the film manages to make it clear enough to follow that after a few settings and character intros it all starts to move smoothly. One would think that due to the sheer volume of characters utilized that it would leave some characters with no moment to shine, but surprisingly every hero (as well as villain) gets a good scene. Even the weakest links here, the newly introduced children of Thanos known as the Black Order, are fun in their scenes, they just lack some depth, but it can be somewhat forgiven as they are just meant to be lackeys. The returning cast members all remind you of how good they are as their characters, while also reminding you why we’re just so invested in this universe, like I said before it’s amazing that this came together as greatly as it did.

There’s plenty of surprises in this movie that will leave you shocked, but one I honestly never considered was that Marvel Studios would chose this film to feel like a deconstruction of heroes. One more time for you readers, I am not spoiling this film, I’ll try to talk about this without much detail, but yes Thanos’ appeal is that he believes he is the hero of the story we are watching. Even the film allows you to understand his point of view, Thanos may be a mad titan, but he has his reasons for acting the way he does and the film doesn’t shy from framing his more human moments as heroic ones, though it’s always clear he’s decisions are extremes. Thanos isn’t simply a bad guy who thinks his good, he’s a man who fears that if his mission isn’t carried out society will regret it ultimately, his goal of saving the universe (in his own ways) is a burden he must carry.

If Infinity War has any major shortcomings, it’s in the early parts of the film. Don’t get me wrong, I enjoyed a lot of what we see as we catch up with everyone and where they are, but it does feel a bit long. Perhaps a second viewing will make these early scenes run smoother, after all this is incredibly ambitious, but I won’t be surprised to hear some complaints of the film dragging early on. Still, once everything gets going I just stopped thinking about everything, allowing the film to immerse me in its world.

Finally, as the film ended I sat in silence, did a Marvel movie really just end like that? As I said before, I saw this hours ago and I’m still thinking about what I witnessed. Expect this to leave a dent to everyone watching the film this week, I fully expect people to be talking about this movie for days, it’s that big. Not since the original Avengers have I felt like I was watching an event, not a film, but this, this makes the feelings I had back then feel like nothing, to say this movie was simply emotional is an understatement.

While we all expected Avengers:Infinity War to bring us a lot of joy between characters we’ve seen over the course of a decade I doubt anyone expected this film. Back in 2012 we expected a massive fireworks show, while we do get that, we also see just how much we’ve grown to love these characters as seeing the fates of certain characters feel like a gut punch. Thanos is a villain in the mold of a tragic hero taken to its worst extremes, he doesn’t just believe he’s right, he’s certain he is bringing the peace we deserve, making the wait for him well deserved. You are not prepared for who dies.