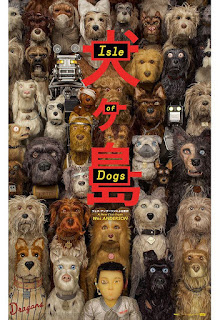 Well this was adorable.

I’m gonna try to keep this one short, largely because it’s pretty easy to sum up my feelings, fan of director Wes Anderson? Well, you’re already guaranteed to like Isle of Dogs, his second stab at animation. If there is one thing worth talking about it’s the controversy around the film’s depiction of Japan and Japanese people, however I recommend you look up the responses of Japanese and Japanese-Americans, no matter what I add or think it’s their input that matters most here, they’re the ones being depicted after all. I personally love the film, but I get that there are issues and I hope said issues were not intentionally trying to insult anyone, unintentional racism/stereotyping is awful yes, but we all make mistakes, especially when it’s things that society has engraved in us, I stress that it doesn’t make it okay, just understandable to an extent. Now to the film.

Isle of Dogs takes place in the not too distant future wherein the canine population now has a disease that is life-threatening to humanity, the solution? Banish dogs on an island of trash. The main human character, Atari, crash lands on this island in search of his dog, Spots. With the aid of a pack of Alpha dogs (led by Chief) Atari will venture through the trashy island, as a conspiracy surrounding the cat-loving mayor arises.

As with any Wes Anderson film you get a lot to like. The sets and visuals are beautiful in a way that just feels so specific to Anderson, the color, symmetry and motion all perfect in a way that is reminiscent of a diorama. The performances, while not exactly the best voice-acting, all have their charm that is all too common in Wes Anderson films, in fact we get his regulars, Edward Norton, Jeff Goldblum, Bill Murray, Tilda Swinton and plenty of others. Again, it’s not the best voice-acting, but the delivery is just so infectious, even newcomers like Bryan Cranston as Chief, deliver the charming performances you’d expect from these movies.

That all being said, yes I wish the film had just removed the English interpreter characters. While the dogs speaking English has it’s own complicated baggage, I do think the film would’ve had less issues raised had they not decided to include the interpreters. I liked hearing the Japanese characters speak Japanese, deciding that we needed everything explained not only ruins a lot of the visual charm, it just feels like they’re ashamed that the Japanese actors had a lot of lines. The worst though is the foreign exchange student who adds little to the story, she’s really just there to remind you that white people are still the heroes in a film set in Japan.

Despite that though, I still love the movie, the dogs are adorable and there’s a lot of heart to Atari’s journey. While I wish the film were less insulting, I’m just glad the quality overpowers the problematic nature; though yes, you should speak out to be heard, hopefully making the next one of these less insulting. Isle of Dogs will not be well-beloved by all and understandably so, but I loved it, even if it does lean hard on some ill-advised racial choices, the stuff that works just works too well, it’s no coincidence that the title sounds like a declaration of love for man’s best friend.