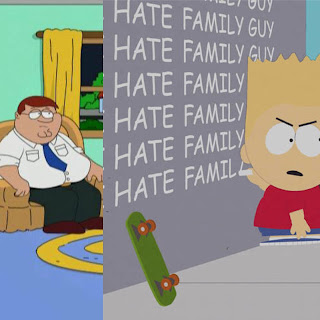 Remember South Park? Remember how cool it was? How smart? How edgy it all was? Well as someone who left high school years ago I can assure you it’s not as smart as you remember it being. I’m not saying the show as always been bad, it has a ton of stuff I fondly remember, however as I’ve gotten older I just don’t see it as appealing as I once did. What was once for me the smartest satire on TV has become annoying, lazy, ugly and not worth my time. This won’t be a Family Guy vs. South Park post, if that’s what you’re expecting, rather it’s an examination of where the show is at now for me, how it lost me as a fan; how weird it is that after a decade I now have more respect for Family Guy than I do for this show. Let’s start at the beginning.

THE BEGINNING OF MY FANDOM

To be clear, I have known about the existence of South Park for about as long as it has existed, where I began watching was around the eighth season. Back in 2004 (wow that was forever ago) I was barely getting used to the idea of adult only cartoons, South Park was my intro to that; raunchy and unafraid to speak its mind, I thought it was perfect. The idea of a show attacking all sides, insulting preachy, whiny people who always find something to complain about, how could I not like this? As a kid entering his teens, Matt Stone and Trey Parker spoke to my mindset and sense of humor, to say I was a big fan was an understatement, I WORSHIPPED the show. I saw all the episodes within a matter of three years, I bought the movie and played it repeatedly, sometimes I’d even just watch for the catchy musical numbers in said movie. It shaped a lot of my thoughts and opinions, screw anyone who disagreed, especially if they were complaining about some politically correct BS. At that point in time, if you didn’t know both sides were dumb, especially the one that was trying hard to be inoffensive, you were pretty dumb as well... Yeah I despise the mindset I carried in my early teen years.

SO ABOUT THOSE CARTOON WARS

A couple of years after my South Park devotion began came one of the most well known episodes, Cartoon Wars. It essentially became the South Park fans’ guide to why Family Guy sucks, as it was for me for some time. The two part episode, which admittedly is pretty funny (assuming it holds up enough for me, I haven’t seen it in what feels like forever), is about freedom of speech being threatened when Cartman decides that an episode of Family Guy must not air because it may be too offensive, of course there’s an evil twist there. In the episode’s memorable reveal, we realize that Family Guy is written by manatees aligning three random balls to set jokes up, it’s funny I’ll admit, but thinking back I realize that therein lies one of the show’s most notable problems, Cartman may be in the wrong, but the way it’s written feels like Stone and Parker only paint him wrong out of obligation. Look at how the episode frames Family Guy (which isn’t entirely wrong, but it is mean-spirited), listen to Cartman’s speech on the show, Stone and Parker may be “fine” with letting Family Guy air, but it’s pretty clear that if they were honest about it, they’d be more like Cartman than Kyle if they were in this situation.

HOW I FEEL ABOUT FAMILY GUY

To keep this short, I like Family Guy just fine. I remember watching it before South Park and even though I hated it around the time South Park mocked it, these days I enjoy it occasionally, even though I’m not a big fan. In fact the same could be said for the rest of creator Seth MacFarlane’s work, I loved Ted, I enjoyed his following films less so, but some parts I thought were fun, his Oscar show was pretty funny and getting Fox to do Cosmos again was actually really cool of him. In fact, MacFarlane’s acting outside his own productions is usually charming, sure he isn’t always a part of great films, or shows, but there’s no denying the man is a solid voice actor. Compare this to Stone and Parker, who just haven’t done much outside of South Park these days, even if Family Guy is the worse show, does it even matter? That is just one thing MacFarlane does.

Again, I must point out that this is not a post arguing over which show is better, rather it’s an examination of how I feel about what I once thought was the best animated series around, as well as how strange it is that I now respect (despite not loving it) the show it brutally insulted. So then, when did South Park lose it’s bite for me? It’s hard to say exactly when, contrary to the “Jump the Shark”phrase, most shows get bad gradually, it’s not about a single episode changing everything, rather it’s the show slowly destroying/losing the elements that kept it together. For South Park, the gradual change for me began around season 11, episodes didn’t interest me as much anymore, despite some fun episodes, I mostly started getting annoyed by how topical the show started being (well okay, it was topical before, but for some reason it just started being more annoying). This isn’t to say I dropped the show altogether, just that it was losing my interest; sure it could make episodes on issues within the same time it was going on (the show normally produces episodes within a week) but so what? There’s only so many times your stance could be “both sides suck” before it just gets boring. Of course that I eventually realized I was disagreeing with the show more often than not also led to my departure as an avid viewer. I am not saying I have to agree with all the beliefs of a show to enjoy it mind you, but when your show is dedicated to tackle ongoing politics it becomes hard to enjoy it when your politics are pretty shitty. While I’ll admit a few episodes of the show by this point did entertain me (that Black Friday three parter did bring me a lot of laughs), I just can’t deny the show was losing me, whether it was the annoying takes the show had on some subjects, or the week long production finally hurting the show (some of the jokes and story beats in that Black Friday trilogy just feel half-baked), it didn’t matter, the show was no longer interesting to me. Where the show completely lost me though, was the introduction of a new character that confirmed Stone and Parker were out of touch with the world around them.

Maybe I’m being over dramatic, after all I don’t think I even saw the season before PC Principal’s intro to South Park, but when you create a character that seems to cater to the sensibilities of online trolls who think “SJW” is a legit term, you pretty much are a lost cause. PC Principal is annoying, not because he’s mocking people like me, but because he’s not a caricature of an actual person, he’s a caricature of some jerk’s idea of what “political correctness” is. At no point have I ever met a person like PC Principal, I have however, met people who think anyone asking for basic human kindness is like this. I get it, PC is meant to be an over the top version of people who try hard to fight for equality, but he’s not funny, nor is he even good satire, if you want a better version of what PC Principal tries to be watch Get Out, the white characters all think they’re for equality, act like they’re not racist and still treat black people like objects, that’s satire. PC Principal asks you if you too are annoyed of people asking you to be a little more sensitive to people who are not straight white men, that’s the joke, it’s stupid, childish and annoying, I’m not offended, just confused at who they’re lampooning because I don’t know anyone like this. If Stone and Parker wanna lampoon stupid activists, lampoon stupid activists, there are plenty of activists that only think about themselves (Bernie Bros, White Feminism, etc.), Stone and Parker instead have a character based not on reality, but on some whiny dork’s idea of what a person looking for equality is like, it’s not only inaccurate, it’s annoying and was the final nail to the coffin, South Park means nothing, it’s an edgy show that tries to speak the truth, but really it’s only spouting wisdom that is irrelevant, inaccurate and just not funny.

So why write about this now? Well because Stone and Parker made the baffling decision to admit they were Republicans (which isn’t too shocking thinking on it) recently. Being Republican doesn’t disqualify your talent admittedly, but why anyone would proudly admit to being Republican now, while the dumbest/worst president in history sits in office is beyond me. Outside The Stick of Truth and The Book of Mormon, Stone and Parker haven’t done much particularly great in this decade, yet this tone-deaf boast was where I finally had to talk about where I lost interest in their show. While I’m surprised you said it, believe me Stone and Parker, we knew, your transphobic stories, your tendency to embrace stereotypes for jokes with little substance and seeing Cartman act as your mouthpiece on some topics were strong indicators. I still like some things produced by the two, but there’s just no denying, to shy away from mocking Trump, as well as embracing the Republican Party now, my first thoughts after hearing the news feels accurate, South Park can insult Family Guy all it wants, but it lost the “Cartoon Wars”, South Park is nothing but a gross out cartoon with awful opinions that just gets more embarrassing the longer it’s left alive.