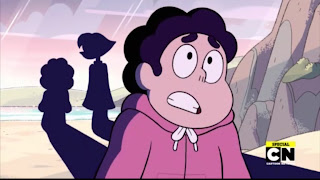 I know I've given a lot of crap to Steven Universe before, especially with the last batch of new episodes, but that's because I care, I want this show to be great. It certainly has the potential with it's strong cast of characters and mythology, which is where this episode shines best, developing our heroes and throwing us a major curveball at the worst possible moment.

As you probably guessed from the image above, Lapis returns this time, thanks to Ronaldo... No seriously thank him, he noticed what Steven didn't about the moon. Yup, Lapis never took the barn farther than the moon, shocking our little Steven who quickly decides to travel with Lion to retrieve his lost friend. Lapis reveals she never went far because she's far too attached to Earth now, feeling like she'd rather stay and face Diamonds than be alone once more. It's actually all relatable especially for those of us who are shy, often depressed or both really, further compounding why I sympathize with her so much, none of this is her fault really, yet it is. Lapis is not the cause of her fear, but she is the cause of her own loneliness.

Just as everything seems to be cleared up though, Steven once again has another of his special dreams, once more witnessing Pink Diamond, the disappointment of the Diamonds. This is where the episode shifts from charming, emotional reconnection to another shock, we see the true identity of who shattered Pink Diamond and it clearly wasn't Rose, in fact it looks like a certain loyal servant. This vision shocks Steven, but shocks Lapis even more, to the point she regresses to her more fearful state, once again on the run she's gone, but now Steven knows who he must question.

This was an excellent episode, starting as a nice emotional episode that ends shockingly, Lapis is nowhere near back home, but this episode matters because it has valuable information. Luckily, we already know the next episode will continue the twists and turns for us, for the first time since perhaps the season one finale arc this show seems to be redefining it's status quo, simply amazing.