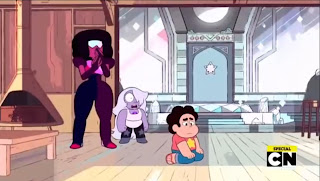 Well that’s one way to get us hyped for the next few episodes...

While I’m sure some fans have seen this coming for years, I’ve only started regularly watching this sometime last year and yeah, I’m surprised. In all honesty the previous episode did set up this reveal for me, but that THIS was the big moment this time was a surprise for me, I’m proud the show followed up with that creepy Pearl shot. Oh... by the way, spoilers from here on out.

After the last episode left Steven with an unsettling vision, Steven, decides to ask Pearl if she was the one who truly shattered Pink Diamond. This of course leads to Pearl shutting down and avoiding any conversation on the thought, though not for long. Steven eventually gets a message on his phone from Pearl, though Pearl has no knowledge of the message (or does she?) and convinces Steven to enter her Pearl to find her missing phone (sure). In Pearl’s Pearl we see past events play out as Steven searches for the phone, going deeper and deeper (yes Inception style) which is both comical and emotional.

Eventually Steven finds where he needs to be, the shattering moment. Yes, Pearl masqueraded as Steven’s mother Rose, but it turns out we’ve been fooled, there was no shattering. In fact while Pearl was Rose, it’s revealed that Rose was actually Pink Diamond all along. It’s perhaps the most shocking moment in the series to date, certainly the most since season one, it’s left a huge impact on the fandom and for good reason. It even shocks Garnet and Amethyst, which isn’t a surprise, their world has been shattered and I hope this means the rest of the season will focus on the fallout of this, sadly it probably won’t.

I can’t say I’m truly in love with this show, but episodes like this make me want to. This is an absolute shock of an episode and I can’t believe the show took this long to let us know that Steven is the son of a Diamond.