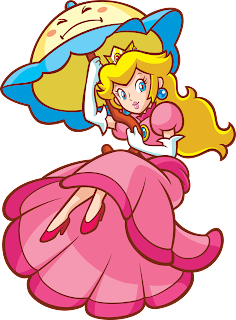 This time on Great Women in Games, the Princess of the Mushroom Kingdom herself, Peach.

I know, a lot of you have probably forgotten about this series, but I felt like my return to blogging after a brief absence needed a great woman to accompany me. I can tell a lot of you are probably already scratching your heads, Peach, gaming's most reoccurring damsel in distress? How can she be a great woman? Isn't she just perpetuating a sexist trope? Well I think it's more complicated than that. Peach has been in more games than any other female character in games, playable or not, that much is impressive, but that she's managed to be a pretty random character with more personality than her boyfriend Mario is even more amazing.

Everyone should know this, most people who know what games are, know what Super Mario Bros. is, they know Mario has to rescue the Princess, who happens to be Peach. So what should I fit this part with? Well, why not add a lot more about her? Most people only know that Peach is the damsel, but they don't know that she's been much more. Outside the core Mario games, Peach is probably best known for the sport Mario games, which already leaves her doing more than most woman in games (how many other women, or characters for that matter, are good at pretty much every major sport?), but she's also been a part of other adventures. While Super Mario Bros. 2 featured Peach as a playable hero, one must remember that was a dream Mario had, in fact in the main series of games it wouldn't be until Super Mario 3D World that Peach would be playable. It's in the spin-offs where Peach has shined a few more times, the RPG games let Peach be a little more active, sometimes to the point of being a party member; adding to that she even had to rescue Mario in her own game Super Princess Peach, which admittedly is a bit of a double-edged sword for her. From all this, Peach is a pretty well rounded character, she's a damsel in distress first, sure, but she's an athlete, capable of holding her own in adventures, silly, random and possibly even more powerful than she lets on. Peach might honestly let herself get kidnapped just to let Mario do something, or because she's trying to fill a role for the stories that kids are playing when they play Mario games.

WHAT MAKES HER GREAT?

In case you weren't paying attention before, no other female character has appeared in as many games as Peach has, that in itself is plenty reason. Peach isn't just about the record though, Peach has plenty to back her up. As mentioned before, Peach is commonly in the sports games, often playing better than Mario, the mascot of Nintendo, himself. The reasons behind that are pretty easy to suss out, considering Mario is often forced to be the balanced character, leaving little room for advantages, while Peach is often made to be a lighter, easier character for newcomers to work with, or one for experts to find ways to take advantage of. In fact, I can guarantee that most people will find Peach to be a much more fun character to work with whenever the option is available. Where I think I fell in love with Peach as a character, was when she appeared in Super Smash Bros. Melee, sure there wouldn't be a story until the follow-up in that series, but it was impressive that they constructed her moveset out of random references to her playable appearances, in a way more reminiscent of characters known to break the fourth wall, than the cute princess she's known to be. My favorite thing about Peach as a character has to be that, she's a cute princess, but Nintendo is willing to have fun with her, making her silly in the games, a battle can be going on, but she'll stop it with tea, she'll be kidnapped numerous times, but will acknowledge it for a cute joke, she's a damsel in distress, yet possibly stronger than her hero.

We're all thinking about it, so I'll just say it, yes it's problematic that she's a damsel in distress. I get it, the early days of games were not complex enough to tell compelling stories, so any plot had to be very simple to grasp, a fairy-tale style rescue was simple, thus Peach was just there to fill a simple goal. It however, does not excuse the 30 following years of recycling this plot point, while Nintendo is always more about the games than the plot, it can't be too hard to make Peach a hero more often than she is right? I mean it's great Peach has appeared in more games than other female characters, it's just a shame she's been captured in so many of those, making the most seen woman in games also the most captured, which isn't a great role-model for women. I like that the games have turned it into a bit of a joke, making it feel less horrible in the long run, but the constant use of the trope makes the joke ring a little hollow and it unfortunately does send a potentially toxic message to young kids, even if that's not the intention. Even if the games revealed all these adventures are basically stage-plays the characters craft for kids, it's still an issue, because that leaves the prominent female character to be without empowerment in the main games, except for a few times. Also, we should probably acknowledge that Super Princess Peach, however fun it actually is, winds up feeling insulting. The one time Peach is given the lead role in her own game and it feels like an extended joke on women, Peach runs around using the powers of her emotions, which become pretty obvious jokes about periods, vibrators and pretty sexist stuff. I don't think it's entirely crude, or even intentionally mean-spirited/sexist but that her only game feels that way is not a great thing.

I know it's crazy, but yes! Princess Peach may embody a lot of negative traits, but that Nintendo has regularly used her, even letting her be a hero in multiple adventures is plenty to celebrate. She's a damsel in distress, which is certainly an issue and one that even turning it into a joke doesn't fully erase, but it's at least acknowledged more than it is in other franchises, so that's worth something. Peach is random, cute, lovable and proof that women can be strong, even when they look and act stereotypically girly. Princess Peach is not just a record holder, she's a great woman in games.