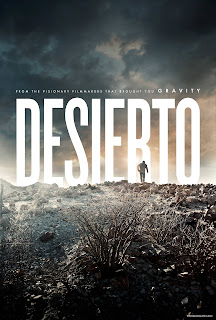 In a year with so much hate for Mexican-Americans (much like myself) Desierto proves to be one of the years most terrifying films, if not the most terrifying given it's subject matter. So many of us like to believe racism is gone, or that it's making a comeback due to a certain orange monster (I promise I won't get too political here, but come on, there must be some talk of it with a movie like this), but the truth is that it will always be here, regardless of how much we hide it. I certainly don't like racism, but it exists, some are more open than others about it, which is frightening and understanding it doesn't matter, because it is evil and makes little sense no matter how much you try to explain it. That, is why Desierto works so much, little is explained beyond the obvious, but it really doesn't need to be explained, sometimes people just hate, we can assume based on tiny details, but it doesn't matter because that hate can never be justified.

The film runs on a very basic plot, immigrants cross the border to America, a racist white man played by Jeffrey Dean Morgan goes out to hunt and kill every single one of them, and we follow a lead who is trying to survive. I'm not joking, that's it, once the shooting starts, everything that follows is just watching our lead trying to survive with his small group, it's basic, but it has to be for us to truly feel the fear of the situation. Aside from a small break wherein the lead, (Gael Garcia Bernal) and a younger immigrant (played by Alondra Hidalgo) discuss their reasons on traveling to America, the film is a relentless cat and mouse chase that never eases up, making for an incredibly visceral film. It's, as I said before, a very basic story, which makes it all the better, sure a movie with deeper commentary on crossing the border may be "smarter", but you won't find the same fear of the travel and racism in that film, this feels honest, who really needs a reminder that these people are going through some hardships for a better life, when we know a racist wants them dead just for trying? During the short break midway through the film, Alondra's character says it best "no one deserves to die like that" in response to another immigrant who was pretty awful, in a way that line perfectly states how I feel about the movie, regardless of who any of these people were (most of which we barely get to know) they don't deserve a death like this, I don't care about learning everyone's life story, I just don't want to see them die horribly because they are people and in the end, that's what matters.

Before we go any further, I'd like to make it clear, this movie isn't perfect, nor does my background (granted I never crossed the border as I was born in the states) suddenly make me forget the flaws here. If Desierto's main strength is keeping the tense situation going for the bulk of it's run time, it's major flaw is finding a way to keep the lead alive. As mentioned earlier, a short break from the tension occurs,while I get why it's there, I wish they had found a better way to start it, Jeffrey's character Sam just deciding to take a break just feels odd, and not at all true to his character. That short break could easily be overlooked though, just for the importance of what comes after, it's Sam's shooting skills that really bugged me by the end, early on we see him pick a majority of the traveling group with ease, yet when it comes to the lead, he often misses what would be easy shots, the film tries to hide this by having random plants appear next to the lead, as if they were shields, but it just feels awkward. Despite that, I still always found tension, even at the lead's expense, so the movie remains effective as far as I'm concerned, perfect? Obviously not, but it works.

We have here a beautiful film, one that deserves to be watched on a big screen. The acting is serviceable with everyone involved, except Jeffrey Dean Morgan, who is just terrifying and great here, along with his dog Tracker. Everything the film does right keeps the brief run time of 90 minutes flowing, my heart never stopped pumping, which made the experience all the more worthwhile, it's beautiful to look at, but frightening to experience.

In a year with the most horrific candidate running, a year where the hatred presented in Desierto is all too real, Desierto feels like the right movie for this moment in time. What makes the movie great, is that the context of this year isn't needed for it to be effective, it's simple, but it conveys more through it's simplicity, than something with more complexities could in a plot like this, go watch it as soon as you can, there's nothing more horrifying this year, than a racist with a gun.