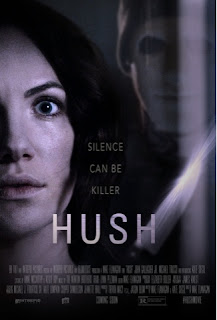 Home invasion thrillers are pretty stale for the most part right? There are clever ones, but so many just follow the same tropes, it's repetitive, creates the same plot-holes again and again, it's stale. So I decided to watch Hush, which has been praised, I assumed for changing the formula, but as I came to find out, it does not.

There's nothing inherently wrong with Hush, at least at first. The movie introduces it's lead (Kate Siegel) fine, giving some hope that her disability (she's deaf) will be used in the film to it's unique advantage,which for the most part, it does not. Don't get me wrong, the film acknowledges that Kate's character is deaf, but beyond a few things, like how the killer gets the early advantage, or Kate using her lack of hearing during the climax, the movie doesn't feel like there was a real need for this, which makes it's main gimmick (a home invasion, but twist the lead can't hear when he's coming for her) feel a bit shallow in that respect. What makes this all incredibly disappointing, is that had the film focused more on this aspect, I guarantee you it would've been more suspenseful, I mean, how do you survive when your killer can easily sneak up on you? I feel there's a lot more there, than the filmmakers ended up using, which is a shame. 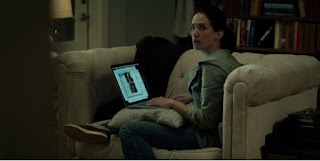 So the "deaf gimmick" wasn't fully utilized, oh well, at least the film's slasher is terrifying right? Again the answer is nothing inherently wrong at first, John Gallagher Jr. as the unnamed killer, is frightening at first, but once he decides to reveal his face (fairly early) he loses all potential to be a truly memorable slasher, he's tough sure, but there's something less creepy about some random guy wanting to kill you, when he looks like an average Joe. Had the film waited on his reveal, or had the actor given a crazier, unique performance, I would have liked him a lot more, instead, we get the potential for a great new slasher squashed, as said slasher becomes just some random guy, disappointing. 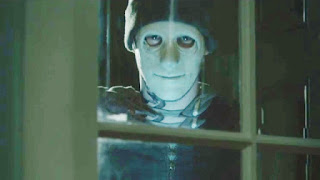 Despite the disappointments, I'd be lying if I said I wasn't engaged to any degree. The lead makes some clever choices throughout the film, which made her feel competent, of course she would then follow up with a stupid choice, leaving for a pretty huge "OH MY GOD HOW STUPID ARE YOU?" Reaction from my end. Still, the film at least made those choices that allowed me to feel at least partially invested, which is more than a lot of other home invasion films tend to make me feel.

I'd also like to note, the film's third act, which is perhaps where the film dipped in quality the most. The lead, finds herself with a few options, leading to, I kid you not, a pep talk from herself, it's as cheesy as it sounds. We all know a final confrontation was coming, after all, these movies often lead to them, but this film messes it up by having the lead make as many stupid choices as possible before it's all over, sure the film tries using her disability to it's advantage, but it feels lazy by this point, almost unnecessary. There's some cool action in the climax, but also some moments of ridiculousness thrown in, as if we didn't have enough of those. 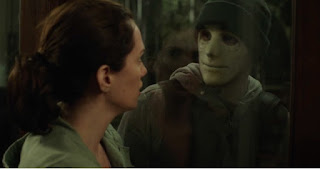 As far as home invasion films go, Hush is probably in the middle, or a little behind that. I liked the concept, the killer had potential to be a stand out, but the film feels like it was satisfied with that, without feeling a need to refine it to perfection. I appreciate the attempt to do something different, in fact I appreciate the moments that are genuinely terrifying, but sadly the film decides to open up a bunch of stupid moments as well, whether it's the character choices, or the filmmakers I didn't find much to be impressed by. If you're a hardcore fan of home invasion films, you might get a kick out of this one, but if you're like me, and horror is a genre you like, but find repetitive at many times within films, this one is best skipped, even if there's a good female lead, she's not worth sitting through this disappointing film.