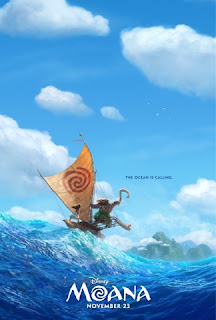 Once more I find myself praising a Disney made film this year, shocker. It's not that I'm paid by Disney (trust me, I'd do so much if I were), or I'm some kind of "Disney can do no wrong" kind of guy, I mean have you seen Chicken Little? This year has just been phenomenal in the critical side of things for Disney, with the exception of two films, Moana is definitely not joining that small group. 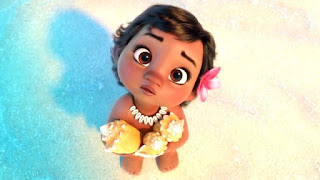 The latest in Disney Animation's stellar output in recent years, focuses on what else? A princess, well, sort of. Moana (Auli'i Cravalho), is the Chief's daughter, destined to become Chief herself, she prepares for the role, despite also longing to sail the sea (a fact her father disapproves of), Moana finds herself quite comfortable in her training. Of course, as it turns out, Moana can not avoid her true calling, when her land becomes infected by a great evil spreading across the world, she must venture forth to save her land. Along the way, Moana must acquire the help of a demigod known as Maui (Dwayne Johnson), who proves to be arrogant and narcissistic, despite being a hero for all. Together, the two face all kinds of monsters, including coconut pirates, a giant hermit crab and a lava witch, all after a mysterious artifact. 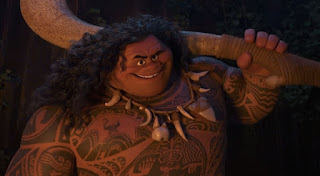 As far as stories go, there's a lot going on in this one, yet the film manages to feel pretty straightforward, despite the large amount of villains the movie never loses focus, which makes the film stick well to landing it's impressive climax, which feels beautiful, epic and terrifying all at once. Moana certainly succeeds at being a "modern Disney Princess" by being independent, having no love interest, while also never bothering to question her place as a women, she's fun and kicks all kinds of ass while being an entertaining character. Of course Maui, also gets to shine as her guide/opposite, feeling a bit like Genie from Aladdin (also directed by Ron Clements and John Musker), except instead of pop culture gags, Maui has magical tattoos, each that comes to life and provides a lot of 2D animated comedy bits. Each character, outside of the leads, help further the story, appearing when necessary, which makes a decent sized cast feel smaller, but that choice is what keeps the focus in the film, allowing it to properly get everything across, without feeling too long.

It's biggest strength however, is in just how well this movie goes through "the Disney formula" without feeling too familiar. Sure, the movie can be reminiscent of other Disney films, but the fresh settings and characters help make this one stand out, it's not just Frozen, or The Little Mermaid drenched in Polynesian culture, Moana feels unique. At times the film even lovingly mocks Disney tropes, with characters addressing that they're singing, or about to sing, which is odd, but the humor there works. 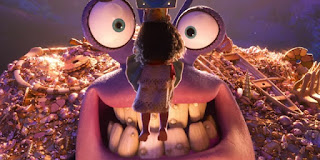 And on the topic of singing, Lin-Manuel Miranda provides a good line-up of songs. Admittedly none of these reach the status of something like "Let it Go", but there's a lot of good material here. I especially appreciate making the music feel like it's connected to the culture, it really fit the mood of the settings. The biggest stand-out song being "You're Welcome" sung by the Rock himself, yes the man can sing and the song is a ton of fun, beautifully introducing us to a self-centered hero, while also providing some neat animation. Another highlight being "Shiny" a David Bowie-esque song, that starts quite normal enough, before becoming a bit more psychedelic, it's sung by Tamatoa (Jemaine Clement) who ends up being the film's best supporting character, a giant crab with treasures all across it's shell. Despite not being the most memorable, there is charm in hearing a musical pay homage to the culture it's inspired by. 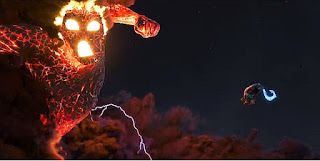 I'm not sure how accurate this all is to Polynesian culture, but I can safely say it feels respectful of it, the film honors it and recieves a unique and beautiful art style in the process. I fully believe Tangled and Frozen would probably have looked more beautiful (make no mistake both already are) as 2D animated features, with this though, I'm not sure. Sure, this would make for a spectacular looking 2D feature, but as I sat and watched the film play out, I never attempted to imagine how the film may look, I just sat impressed by the locations, the character animation, all of it amazing to just stare at. Maybe it's just how much the film pays homage to its culture, but this is definitely among the more impressive visual creations from Disney Animation to date. 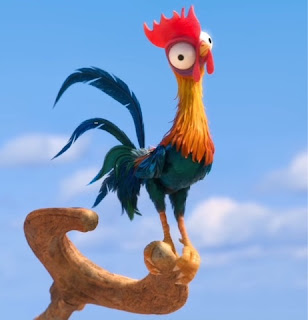 Moana is a beautifully charming film, that will probably make critics argue over which was superior in 2016, this or Zootopia, my money is on this, but there's a good argument for whichever you choose though. I loved the cast (even Alan Tudyk's Hei Hei is bound to become a favorite among Disney sidekicks), the animation, the music and the story, highly recommended, watch this as soon as possible, especially if you want to give a young girl a great heroine to aspire to.