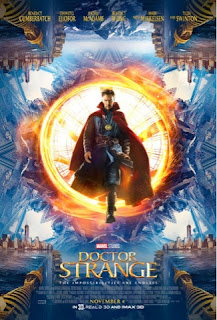 Is it getting tiresome that these movies are good? Not at all, but it does make it harder to praise these films, without sounding like a fanboy.

So, as you can gather from that headline, yes this one is good, really good, Doctor Strange is a psychedelic and fun superhero movie. It's such a fun movie, but you know what could improve it? Moving away from origin stories. Sure, I liked the overall movie, but I really would've preferred moving past Stephen Strange's accident, just to get more of his studies as a sorcerer, sure that still functions like an origin, but seeing him already learning this stuff from the get go, rather than filling the first act with moments of "see this guy is a jerk, he must be redeemed", would allow for a more mind bending film, with a lot more time to enjoy what's in front of us. A few brief flashbacks as Strange bonds with Wong or Mordo, would be able to tell us what we need to know, while keeping the focus on the magic, it just feels boring to sit through that, not unnecessary, just routine by this point. Origin stories aren't necessarily awful, but getting past the most common elements of them can surely help, and would've helped this film.

Without a doubt, this is by far the most visually imaginative and pleasing superhero film to date. Marvel Studios takes full advantage of the mystic, allowing for time, space, the mind and settings to twist and turn, collide, as well as shift entirely to create visuals so unique, I almost regret not being a big fan of drugs, because trust me, the people who will most benefit from watching this, are the ones who are stoned. One of it's many highlights include the climax fights, which are more inventive than anything I've seen all year, it's pleasing and delightful. The visuals and manipulation of time in the climax create a scenario, wherein the action is of less importance than the magic, making it feel more unique than most other films in the genre, it's refreshing. Of course the one thing that can enhance visuals is sound,  and the score by Michael Giacchino is great to hear throughout, I loved it, and I hope it gets the recognition it deserves.

Now to address the elephant in the room, yes the white washing is wrong, but it's a complicated scenario, they're handling this better than others have, so I understand why it will bother many, but I also understand why some will shrug it off. Acknowledging the racial issue here, Tilda Swinton is great here, as are supporting actors like Benedict Wong and Chiwetel Ejiofor, who compliment lead actor Benedict Cumberbatch. In fact even the minor actors are good here, sure Mads Mikkelsen should be in this more, he is the villain after all, but it's a good performance, so Marvel's "villain problem" isn't so much the performance, as it is, once again, a lack of screen time. Also on board, Rachel McAdams as the love interest, she's good, but lacks time to be great, hopefully a sequel can rectify that. As usual, Marvel studios is good with it's cast.

My biggest shock by the end of this though? Marvel Studios made the good version, of  DC's Green Lantern, I'm not even kidding here, the final villain, the origin of another villain as a subplot, the hero being a conceited, but exceptional man in his field, the powers coming from the mind, the training, it all reminded me of that movie, but done right of course. So if you were wondering if there were any use for the bad DC films, it's apparently to help Marvel make a better version.

In conclusion, yes Doctor Strange is Marvel's 14th film in a row to be at the very least good, does that make me a fanboy? To some yes, but I'm not gonna lie about my opinion to look "fair" for a bunch of whiny internet dorks, Marvel is good at what they do, Scott Derrickson made a wonderful and visually impressive film, just give him your cash, trust me you'll enjoy it.