BATMAN:RETURN OF THE CAPED CRUSADERS

FINALLY! At long last, a Batman movie I liked from this year. 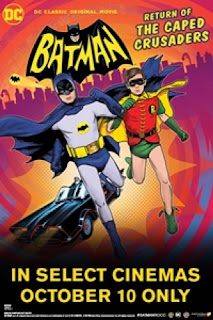 DC animation (movie wise) has been pretty hit or miss for me lately, sure there are the classics, but lately it seems the films just aren't good (the beating their last film took was amazing), thankfully that's not the case with this movie. Love him or hate him, Adam West's Batman is one of the major reasons Batman got popular, so it's nice to see him (along with Burt Ward and Julie Newmar) back for Batman:Return of The Caped Crusaders. I'm not gonna lie, I was looking forward to this one, but given the recent track record on DC's part, I wasn't gonna be surprised if this one sucked, thankfully, it doesn't. Batman:Return of The Caped Crusaders is a loving homage to the classic show, while also, quite surprisingly, a commentary on the darker takes on the character in recent years, seriously.

So what is the story? Gotham, is being terrorized by four of its most fiendish villains, The Penguin, The Joker, The Riddler and Catwoman (nice nod to the original live-action movie), so it's up to Batman and Robin to save the day. Things become complicated though, when Batman, starts acting more aggressive, turning everyone's favorite bat-themed hero into a bat-themed anti-hero.

Yes, the story is pretty odd, in fact, it's even odder than that, but to give it all away, would be ruining it for you and trust me, you don't want to be spoiled. It's a Batman movie with humor, with a witty look at   his history, a mystery (albeit a silly one), and something surprisingly rare in Batman movies, a focus on Batman himself. More than any Batman film in recent memory, I smiled throughout this, I laughed, I was engaged in the action, however comical or light-hearted,and on top of all that, I was invested in this unironically. It's nice to see Batman be allowed to be silly (as many of his comics once were and sometimes continue to be), it's nice to see him be a detective, it's nice to see him be a character with major focus in his own movie, that's not as common as you'd think.

Even Robin gets a lot of attention here, something the live-action movies have been avoiding because of a certain movie. I like Robin, he can be a lot of fun, he certainly is here, so I am disappointed at the reluctance of using him, but seeing him here is a delight, and not just because it's nice to hear Burt Ward again.

I liked the cast here, everyone does a fine job as far as I'm concerned, they brought in a talented group who voiced the characters perfectly similar to the cast in the original show. As much as I loved it all though, there is one minor nitpick I have to make, and it's one I hate to make, but Julie Newmar is the weak link. I want to make this clear, as long as she's still alive, I wouldn't want anyone but Newmar to voice Catwoman in these movies (a sequel is planned), she is great and deserves it, however, if I am honest, I am sad to admit that her voice can be jarring to hear out of Catwoman. I think Julie is fine in most of it, in fact I think her voice is fitting more often than it isn't, but more so than West and Ward, I did notice at times that her voice sounded a bit off, a bit old for the design of the character. Again I hate admitting this, because I still would not have preferred anyone else to come in, which is why I will classify this as a nitpick, Julie is still good here, she just doesn't always match the character, which isn't her fault, so much as it is life's fault, still as far as I'm concerned Julie, you kick ass.

So, has DC disappointed you this year? Guess what, DC is here with something that is pleasant, well animated, well cast, and most importantly, well done. I loved this movie so much, I almost have a hard time contemplating this, but I think DC, for the first time in years, has made a movie that I preferred over the Marvel features of the same year... I'm at a loss for words, but that's how I truly feel. You might have missed this on the big screen, I know I did, but trust me, I can whole-heartedly say, you will love this movie, it's a celebration that's too good to be missed.

Did you enjoy this?Support me on Patreon!