I had one major question throughout this movie, why, why did so many hate this movie? 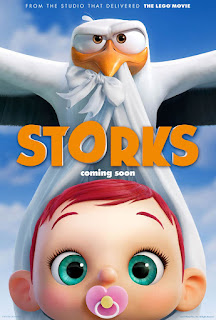 Storks is the latest offering from Warner Animation Group, A.K.A. the only part of the WB, that seems interested in making quality movies. I'd say I'm joking, but then I remembered Batman v Superman was a movie this year. All jokes aside, yes, Storks is a funny comedy, as well as a good follow-up to The Lego Movie. I have a hard time forming thoughts that don't give away the jokes, but trust me I'll do my best to keep this as spoiler-free as possible.

Directed by Nicholas Stoller, Storks tells the story of a world where the childhood explanation of "where babies come from" is not only true, but only stopped being true about two decades ago. Junior (Andy Samberg) is the top delivery stork at Cornerstore (an Amazon like delivery service), who's on the cusp of becoming the boss of the company, as the current head (Kelsey Grammer as Hunter) moves to a chairmen position. After Junior fails to fire the only human at Cornerstore, Tulip (Katie Crown), Junior finds himself farther away from his boss position as the baby making machine is suddenly working again. With the help of Tulip, Junior will have to deliver the new baby to her family before it's too late for him to receive his promotion.

Plain and simple, this is one hilarious movie, one of the funniest all year, and the laughs don't really stop once it starts. While some of the plot is a bit too lazy or contrived, the movie isn't really about the story as much as it is about the characters and humor that can be brought out of that. It's a simple tale that examines a well known fable that parents tell their kids, while trying to turn it on it's head, yup this is practically a Pixar movie.

In many ways this feels like Warner Bros. got their hands on a rejected Pixar script, sent it to their animation studio, requested it feel more like a classic Looney Tunes short and this was the result. Junior and Tulip feel like a classic Pixar duo in the vain of Woody and Buzz, Mike and Sully, as well as others, they're charming as our leads. Once we get our understanding of how the world works, everything gets very physical in the humor department, making the transformation from what would easily be mistaken for a Pixar set up, turn into a full length classic Warner Bros. short, it's odd but amusing. I have to wonder if that was the goal, I'd say yes, but there's really nothing pointing at that being the goal, especially since it's not saying anything about the Pixar formula, it just seems to borrow it to a certain extent.

As mentioned before, the strength here comes from the comedy, as well as the characters. Minor characters like the wolves (voiced by Key and Peele) steal the show, adding to the absurd humor of it all. Though the best is definitely Tulip, who is perfectly voiced by voice actress Katie Crown, I imagine the producers must've thought so as well to have avoided casting a bigger name to the role. There's a strong cast here, and it wouldn't surprise me if they all had a hand in the humor, maybe doing some improv, which is no problem as far as I'm concerned.

I loved the humor, I loved the cast, I even loved the animation, and I hope Warner Animation Group continues with their quality work. Storks is funny, entertaining and animated feature deserving of more love, give it a watch sometime.

Did you enjoy this?Support me on Patreon!