THE MYSTICAL MJOLNIR #5-SHOOTING AN INTERVIEW

What's that? A new comic? Yes! 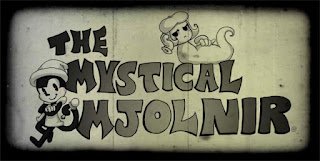 Shout out to www.cutestockfootage.com and Maria for this title card! 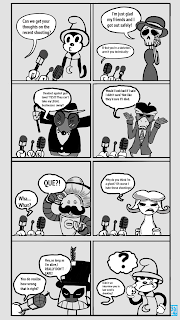 I apologize if this strip offends you, I know mass shootings are hard to joke about, but I'd be lying if I said I haven't wanted to do this one for a while. Guys, ladies, people, I'm tired of waking up every morning, tired of going on break, tired of looking online as I write, only to hear we've had another tragic shooting, it's almost routine at this point, and I am SICK of it, while other countries have handled this issue, we act like there's no solution, the honest truth? A majority of the people in power, maybe even a majority of the people in this country don't want to lose their precious guns, well folks, if you're stable enough to not go shooting up places, I guarantee you won't lose your gun. People, it's time to seek out other countries and their ways of handling this issue, restrict guns that are useless for everyday use, find ways to stop the incredibly lethal guns from finding their way to the people who are unstable enough to shoot innocent civilians, it isn't impossible, please, just stop this madness. You know how common this is? Every time I walk into the opening of a new movie, especially one that's popular I am now afraid I'll get shot, my viewing of Star Wars:The Force Awakens that Thursday night was partially ruined because I feared a shooting might break out there, or elsewhere, same goes with Civil War, I feared the new Ghostbusters would get one of those whiny morons online crazy enough to shoot a theater up, and this goes beyond a theater, I'm not afraid to do things in the world, but I now consider a shooting to be a possibility, it's gotten that common, and what scares me the most, is living in a society that thinks that is fine.

Anyway enough with that rant, if you haven't noticed yet, today's comic is drawn by a new artist Jonathan Mulyadi Lisardi, I love his work here, and my cast here looks really good. Anyway if you want to see more of his work, follow him on instagram @mangkodok and if you want to see more of this comic, at a faster rate, please, support me on Patreon, it really helps, plus it'll support the other aspects of my blog. Until next time, I hope you enjoyed this piece!