THE MYSTICAL MJOLNIR #6-LOVE AND BONE

This week, things heat up for Shelly, Citrine is there, and Mjolnir appears cause it's his comic. 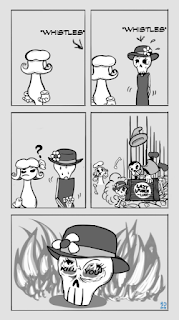 As you probably figured out, Shelly loves Citrine, making her, you guessed it, a lesbian. Originally conceived as a male character, Shelly was always meant to be an antagonist to Mjolnir, the gender change occurred when I realized there were so few female characters in the comic. Rather than change her goals (win Citrine's heart) I kept it with the gender change to make her further stand out. So why is she antagonistic towards Mjolnir? Well ever tried hitting on someone while their friend ruins your moment? Anyway, this story is not over yet, expect it to continue soon.

Just like the previous comic, this is drawn by Jonathan Mulyadi Lisardi (follow him @mangkodok) and if you want to support the comic stop by Patreon, more support equals a faster rate of comics and improvement overall, I hope you come back soon.