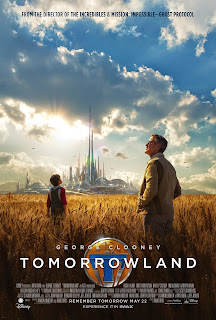 Synopsis- The future wasn't always so gloom and doom as we often see today, Casey Newton believes in optimism, upon finding a pin that leads her to place seemingly filled with it, Casey, embarks on an adventure to find it filled with danger and wonder.

Brad Bird has been responsible for a lot of quality work, mostly well-beloved family films, which is why Tomorrowland feels a bit disappointing, not bad, but rather weak. I'm not sure what exactly went wrong here, I want to say studio meddling, but there doesn't seem to be anything forced into the film, aside from the title, which as far as I remember is never uttered in the film; most put the blame in writer Damon Lindelof, which could be the main factor, but I'm not so sure, it just feels like a genuinely well-intentioned mis-fire. Studio and writers aside, I definitely feel it's a testament to Bird's talent, that the film manages to keep some level of quality;the optimism is admirable, and the performances are really good, enough to forget some of the shortcomings as the film moves along, which is why I won't be surprised to see fans turn this into a cult film in the coming years.

Britt Robertson is very believable as the optimistic Casey Newton, I don't think I've seen her elsewhere to judge her based on previous performances, but she's great here. George Clooney plays Frank Walker, a grizzled inventor with a chip on his shoulder due to his exile from Tomorrowland, despite playing against type, Clooney is wonderful as the cranky character. Talented child actors are often hard to find, but Raffey Cassidy is great as the animatronic Athena, during action sequences I almost felt like asking Disney put her in a Marvel film, she's that good; it's just a bit unfortunate she has to be a part of the creepiest aspect in the film, her relationship with Clooney's Frank, gets a bit too close to pedophilia levels of disturbing. Filling the villain role here is Hugh Laurie as David Nix, he's fun, having a great speech arguing against Earth, but he ends up a bit short, the time it takes to get to Tomorrowland could've been shorten to include more sequences with him and Tomorrowland.

A major flaw in the film comes from the film's insistence in keeping a mystery on Tomorrowland till the third act, sure the trip has it's fun moments, but it sacrifices a lot of fun visuals, sacrifices a lot of rich lore that could've been explored in the film, but most importantly it sacrifices what could've been a lot of interesting critique on both the positive and negative futures. Sure, the old vision of the future was positive and bright, but that vision was partially the creation of avoiding the truth around us, while the modern vision, despite the doom and gloom, gives us an understanding of what we may be doing wrong in our world, the arguments are never really made, making the film feel so one sided, some arguing over what's best could've made it all the more interesting.

As mentioned before, the film has a creep factor with both Clooney and Cassidy, I understand the idea and sincerity behind it, but it just feels one step away from something truly horrific for Disney to showcase in a family film about positivity. As much as I hate to admit it, the easiest solution would've been to make Athena played by an older actress, I hate to admit that as it means the removal of a talented young actress, of course a better solution could keep her, but it would've been much harder to make it work. I just feel like the problem should've been obvious from the beginning, but everyone on set felt too nervous to admit what they were witnessing, Clooney, especially should've stopped to ask "what the hell am I saying?" but maybe the money was enough to forget how disturbing it all ends up being.

Tomorrowland isn't bad, but a lot of it felt unclear, or wasted in its potential, add the strange choice for Clooney and Cassidy's roles, making for a problematic movie. I still believe it's a genuinely decent film, but I imagine some others will love it and turn it into a cult film, which I will not have a problem with, the film has some good points, the children watching this will be inspired, ignoring the flaws I see and that's okay.