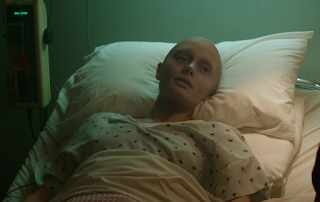 If you read my reviews on the MCU films, you might remember that my favorite film of the bunch was Guardians Of The Galaxy, an epic space opera set in the Marvel Cinematic Universe. It was a success, a huge one, so huge it got a sequel lined up immediately for a 2017 release, so here's where I get to talk about my list of wants for the sequel... well not really. While I certainly have my desires for the sequel, I just don't care to dedicate an entire post on a checklist of demands, instead I want to focus on one area alone, Peter Quill's mother, Meredith Quill.

Now, director James Gunn has made it no secret that Guardians Of The Galaxy 2 will deal with Peter's father, which is a good place to go, but I'd like to see the film keep Meredith as an important figure to Peter; in fact I'll be amazed and speechless if by the film's end, Peter realizes that his mother was, and is a more important figure to him than his father could ever be. To explain my desire for this, I must first explain one of the key things I loved so much about the first film, Guardians Of The Galaxy is one of the few superhero films, where the mother matters more than the father, in fact, it could be the only one in recent memory(correct me if I'm wrong) which should say a lot. Think about it, the Spider-Man reboots placed emphasis on the dead parents, but realistically the father is the only one that really seems to factor into the story; everything Batman related tends to emphasize Thomas Wayne, even though Bruce mourns for both parents; Superman, spotlight the fathers; Daredevil, Iron Man,  need I go on? The closest we get to honoring the mother in recent superhero offerings might just be Thor:The Dark World, where Frigga is made into a badass warrior, as well  as the main emotional support for Loki, but even then, Odin still remains more important to the film; aside from that, only the Raimi Spider-Man films come to mind, wherein Aunt May is placed in very high regard in Peter Parker's life (something the Amazing Films downplayed), but once again, it becomes a question of who's more important, the man who taught Peter his most important lesson? Or the woman who is still his emotional support? Only Guardians Of The Galaxy makes the choice of who is more important clear, Meredith Quill.

In the film; which if you haven't seen you not only should, but may want to avoid the rest of this article as spoilers will be made; we find Meredith dying within the opening sequence, yet her appearance in those few minutes impacts the film in huge ways, we see Peter is a well-meaning boy, despite being a bit of a scrappy kid, witnessing his mother dying is too much for him,  which of course leads to his eventual abduction into space. Throughout the film we learn some important things, Peter's taste in music is inspired by his mother, his insistence for keeping his "Awesome Mix Tape Vol.1" comes from his connection with his mother, in fact the name he insists on using, Star-Lord, is revealed to be a nickname given to him by his mother, his morality and personality could be interpreted as a reaction to his resistance from coming to terms with Meredith's death, opening his mother's gift and letter is his coming to peace with the death, so on and so forth, Meredith was, in fact is important to Peter. 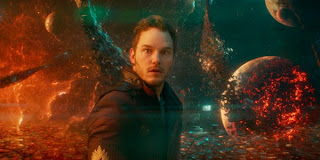 The sequence in the image above, wherein Peter is reminded of his mother's final wish, to hold her hand one last time, is an emotional moment not often witnessed in superhero films, Peter feels regret in not doing so, but is trying to make peace with it. Peter's reluctance finally comes to an end, fully accepting his mother's tragic end, allowing him to finally open his gift after reading her final letter, a touching message, fully cementing her important role in his life, resulting in my desire for the sequel, keep Meredith important to Peter, remember Star-Lord's mom.

I have many desires for the sequel, I'd love it if they decided to title it Electric Boogaloo (look it up) and I'd love it if Howard the Duck is given a more prominent role, I hope the Time Stone is revealed in the film (in fact I feel confident it will appear) but keeping the mother as the more important figure in Peter's life? That is something I feel should be placed high on the priority list. James Gunn, if you ever read this, I hope you at least consider the importance of Peter's mother in Guardians Of The Galaxy 2.