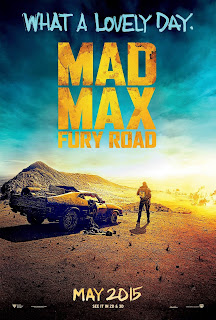 Synopsis- Max Rockatansky is forced into an alliance with Imperator Furiosa, together they will race through the desert with a group of women who want their freedom. As they make their way towards freedom, they'll find many gangs chasing them across their mad world.

Sometimes waiting for a movie can be worth it... Let me rephrase this, sometimes waiting for MANY years for a movie can be worth it, going by the reactions for Mad Max:Fury Road, I'd say it's one of those times. I gotta be upfront, I've never seen the previous films in the series, sure I know what they are, what they're about, but I've never seen them, in fact I'm more familiar with director George Miller's family films, so I do feel like I'm committing some kind of movie geek sin. Seeing how my choices this week for sequels were this or Pitch Perfect 2, I chose to go with the film that had awesome trailers, which explains why I chose to watch something I had little knowledge of, well the positive reviews helped, but that's minor compared to the former reason.

While I'm not one to complain about the use of CGI in films (well at least not much) I will admit one thing, seeing the impressive practical effects in this film was such an amazing treat, that the film could've lacked in more areas and still have been good. The vehicles are some of the craziest, as well as most interesting looking cars I've seen in a movie in ages, my particular favorite being the Coma-Doof Warrior's ride, I want to explain it, but trust me, when you see this film, you'll know who he is. Great effects will only take you so far, with an action movie you need great action, which this film has no shortage of, as a film that's essentially one big chase scene, the amount of excitement that comes through was necessary for this film, it's a masterpiece in that regard, resulting in a level of quality that no film this year will be able to reach, it would take a miracle for anything else to even come close.

Visually it's a masterpiece, but the film also excels in the cast, I may not know if Tom Hardy is a good replacement for Mel Gibson (going by the audience reactions, yes?) but I do know he's good in the role, bad-ass in fact. Despite the title, it's Charlize Theron as Imperator Furiosa who feels like the real lead, as a woman trying to escape from a society that abuses her and a group of women she brings with her, she feels like one of the strongest female leads in recent memory, Theron is fantastic, so much so that there's no disappointment in her leading a film named after another character. Nux is a character that grows on you more and more as the film progresses, played by Nicholas Hoult, he's very sympathetic as a character who only wants some form of honorable recognition, making him the character who grows the most throughout the film. Immortan Joe is a villain we see little of, but leaves enough of an impact to be memorable, with a menacing design, as well as a terrifying voice, Hugh-Keays Byrne is great. As mentioned before, there are a group of women with Furiosa, all played by super models, it's not only a surprise but a breath of relief to know they all succeed in portraying their roles, maybe it's just sheer luck, but it'd be nice if it turned out that they all are talented. There's a lot of talent in this film, even in the smaller roles, which makes it feel like there's more then enough substance in it.

It's a very rare moment when everyone seems to agree with something, but this seems to be one of those moments, it's a very pleasing moment to be sure. Mad Max:Fury Road is one amazing film, if you haven't seen it, rush, go watch it now, it's will worth the wait for fans, as well as a great introduction for newcomers, this is how a masterpiece looks like.