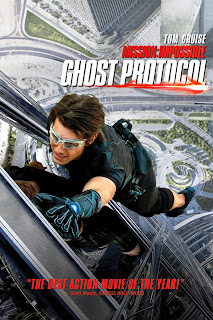 Synopsis-Framed for a terrorist attack, the IMF agency gets disavowed as the president initiates Ghost Protocol, leaving Ethan Hunt with no resources and little backup to stop another terrorist attack from happening, while clearing his agency's name.

Based on the television show Mission: Impossible came the Mission:Impossible film franchise, which has been a Tom Cruise vehicle for nearly two decades. Given that this was the fourth film in a franchise that has usually gained mixed reactions, it was pretty hard for me to believe that this would be great, then I heard Brad Bird (director of The Incredibles, The Iron Giant, and Ratatouille) stepped in as director, which piqued my interest, seeing a man who had only done animated features up to that point step in for a live-action film would be interesting to see if he could succeed given the different style of film. Mission:Impossible-Ghost Protocol ended up winning over critics, giving studios confidence in letting Bird do more live action films, but was it truly great? No, but it was a fun ride, revisiting it has reminded me of that.

Ghost Protocol features some pretty well shot scenes, at times the scope is just beautiful, especially during the film's most memorable scene, wherein Tom Cruise climbs the Burj Khalifa. The action here is well choreographed, considering the effort the actors put into it is noticeable, in fact, the best thing about it, is that the film avoids using the "shaky cam" technique so many had been using up to that point. There are a lot of stunts in the film, that as far as I know were performed by the actors, they look impressive, but the best is the Burj Khalifa stunt mentioned before, if every film in this series exists just for Tom to make a crazy stunt, then I'd say it's money well spent, as that scene is amazing . When it comes to the action in this film, each of the main stars get to shine at least once, which is important in a movie with a team, though sadly, Tom still ends up feeling like a one man army, that's not bad, but it does make one wonder why he needs a team sometimes, but at least everyone still gets their chance in the limelight.

Tom Cruise reprises his role of Ethan Hunt the leader of this team, he plays the role so well that all those jokes that automatically come to mind about Cruise quickly disappear because of how awesome he is in the film. Jeremy Renner portrays Analyst William Brandt, he's fine in the role but for the most part usually comes off whiny, which does affect how great he is in some of the action sequences. Simon Pegg reprises his role from Mission:Impossible III, as Benji Dunn, who much like Renner's character whines a lot, but unlike Renner there is a likable joy in seeing him since he is meant to be more of a goofball, making him the only character who truly seems to stand on his own without the need of Cruise to bounce off of. Paula Patton plays Jane Carter, the female lead in the film who is a pretty tough character in her own right, she's great in her scenes, but given how little I remembered from her before re-watching the film for this review, unfortunately says bad things about how memorable she really is. The film's main antagonists are not seen much and not much is known besides them being terrorists, it's not a huge weak point considering that they're not the focus in the film, but a little more presence would've been more interesting, at least to showcase more danger for the heroes.

What makes the film work so well is that even people who have never seen the first three films can enjoy this without missing out on anything, which is exactly my experience with it. The film sets up an interesting idea with the characters being placed in Ghost Protocol because it makes the struggle all the more real, even if Tom Cruise still manages to feel on top of it all. Featuring some fun dialogue and well timed humor, this film really finds a way to entertain anyone familiar with the franchise, or not, making for a great popcorn flick. It's fast paced, and always lives up to the franchise title that it seems like the right director was brought for the job. Mission: Impossible:Ghost Protocol, lives up to it's title, it really is a fun time, Brad Bird has proven he is more than capable on taking on live-action films.