*Welcome to a (sort of) new thing I'm trying, every now and then I'll watch a random film I've never seen, nor have any interest in seeing from Netflix while doing the things I'm mainly interested in doing/writing, afterwards I'll be writing these pieces, these will not be the standard reviews I've been doing, but I hope you enjoy what I write. 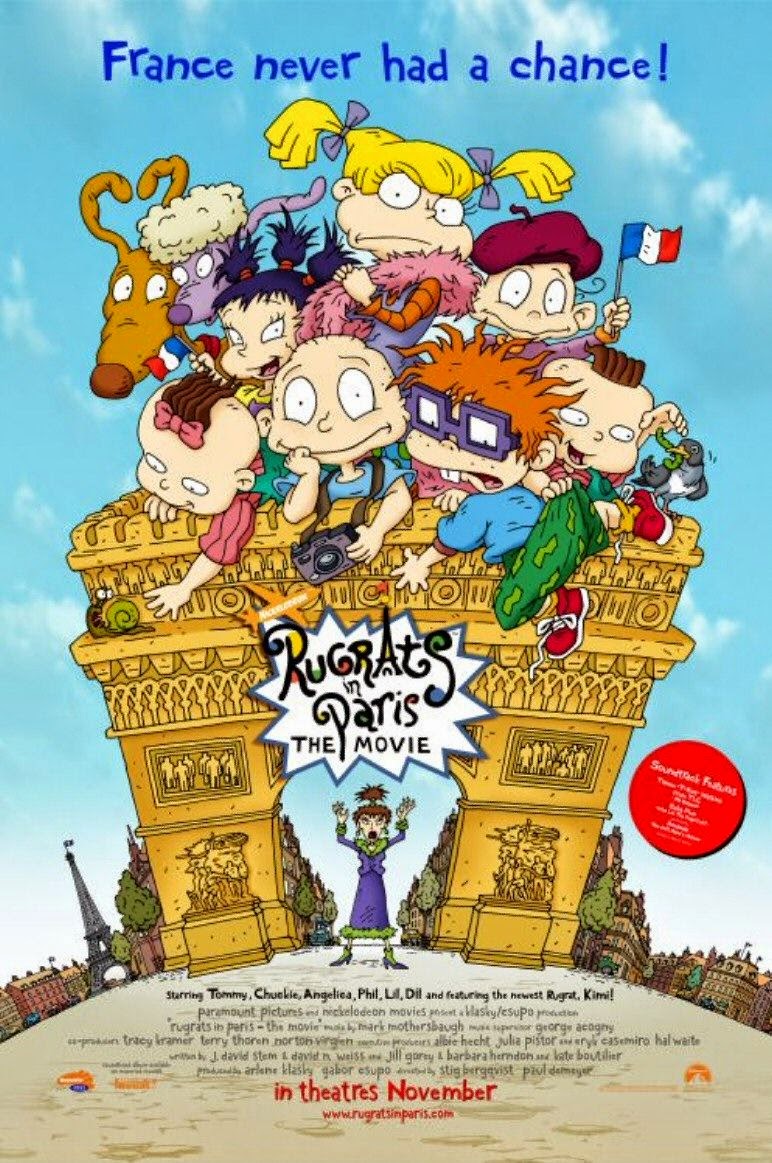 Initial Thought - As someone who was born in the 90's you'd assume Rugrats would be some kind of landmark show for me, something special, meaningful, yet it's really just an average show for me. To the show's credit I really enjoyed the early seasons, but the second Dil got introduced, the show became very mixed for me, then Kimi came along, making the show feel more repetitive , so, yeah, I never really considered it to be the best nicktoon or even one of my favorite shows growing up, it was there, I laughed, then moved on to stuff I truly loved. I saw the original film on T.V. years ago, it was fine, but I never cared to watch the sequels. A few years later I saw Rugrats Go Wild, which was very mediocre as far as I remember, yet I never saw the first sequel, Rugrats In Paris, which I often heard was the best of the three. I never really put much effort in trying to watch Rugrats In Paris, it just never mattered, I didn't care for the episodes featuring the characters introduced in it, the other films in the series were nothing to go nuts for, and I just felt like it'd be a forgettable feature anyways. Rugrats was just an average show, nostalgia wasn't a major factor, so I never expected to watch this movie in the near future.

How I Stumbled Into It- While Netflix is certainly a fun way to watch movies, over the years people have made random generators, risking the chance to watch something you'd never even heard of, or worse something horrid, I stumbled on this in a different way. I covered my eyes and simply moved the control in so many random ways before stopping, resulting in me landing on this film, it's not as random as other methods, but I felt it was right for a first try on this.

Thoughts After Watching- It's very average, while I can agree that it's technically the best of the films, I feel like the first had a better concept for a film, this feels a bit too much like a promo for the new "Rugrat" Kimi. The film does have a feature length story, as well as some emotional beats, but none of the stakes there ever felt real, especially considering that there was never any secret about Kimi joining the group, that much was practically advertised by Nickelodeon, but yes it overall does work. A lot of the film is pretty humorous, the songs while unnecessary, are more bearable compared to the others, and the movie does have more heart to it, but I still feel the first had more potential, the story in that felt more worthy of a film. While The Rugrats Movie existed to promote Dil, it still felt like the story had stakes to it, largely because the babies had gone missing in the woods, while it was also leaning on whether or not the babies grow fond of Dil, this movie doesn't have that. So why consider it better? Well in the end, aside from the positives mentioned before, the animation here felt the most ambitious, whether it be in the landscapes, or the dream sequence, or the Reptar climax fight, it adds just enough fun to feel like I've walked away from something fun.

Final Verdict- It's okay, then again, I was never a big fan of the series, so if you are I can imagine you'd love it. I think it is the best in the series, much like others do, but I felt the ambition was in the animation rather than the story, if judged by story ambition alone it'd be the second best. Give it a watch if you're a fan, but you might want to skip it otherwise, it's just plain average.