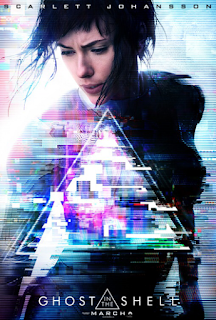 Is it an awful film because of the white-washing? Well I'm gonna discuss spoilers after the review, so stick around for that. 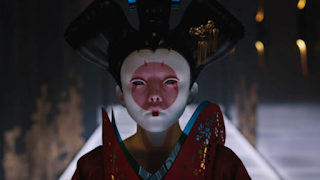 Regardless of quality, this was always going to be a controversial film the second Scarlett Johansson stepped in the lead role, there's no question in that; so how's the finished product? It's okay. I know I'm in the minority here, but yeah, I did find myself engaged throughout the film, maybe it's how beautiful it all is, maybe it's because I'm only familiar with the source material as a thing that exists (I've never seen/read any of it beyond the passing reference) but yes I did find myself intrigued all throughout. While the movie certainly felt longer than it was at times, I just can't deny that I liked sitting through most of this, despite some flaws that keep it from being good, which is due to its awful decisions to go through white-washing the lead. 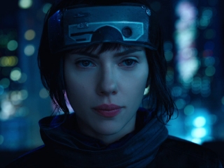 Just so we're clear, Scarlett is good in the lead role, despite how messed up it is that studios still act like taking roles away from non-white people is okay, Johansson fits this character well. Most of the cast works well, not once did I roll my eyes over the performances on display. At first, even the non-Asian actors don't seem to be much of a problem, while it's clearly Japan, the film does at least make it feel like the city is multi-cultural (some more extras could've helped highlight this point though) but the latter half of the film is where it all goes down. Without giving much away (at least not for now) there's a twist involving Johansson's Major, this is my first exposure to this story so I may be wrong, but I'm sure it's a new twist for the film, created possibly because of the backlash. Suffice to say, yes this twist was probably created as a way to prove complaints wrong, but ends up being a double-edged sword with the filmmakers getting the more harmful side of that blade. For the sake of staying spoiler-free, at least for now, I'll move on. 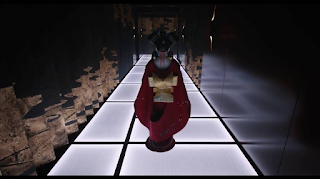 If there's one reason I recommend at least one viewing at all for this, it's the visuals. Trust me, practically every shot in this film looks amazing, there's an incredible dedication to bring the anime look to live-action, as far as I'm concerned the team succeeded just on this front alone. Even in moments where the film felt like it was too long, or moments that felt rushed (the third act especially never moves at an appropriate pace) I was mesmerized by what was in front of me. I'm not sure how much effort was made to push the studio into keeping this visual style all throughout but it was definitely more effort than the effort made to keep an authentic cast. With that said, I recommend at least one viewing of this just for the visuals alone, Ghost in the Shell definitely suffers from pacing issues, but put that aside and you've got a fun film to watch once, however the white-washing is less forgivable, so I understand if you choose not to watch this over that reason. Now then, let's get to spoiling this.
SPOILERS!!!!!!!!!! 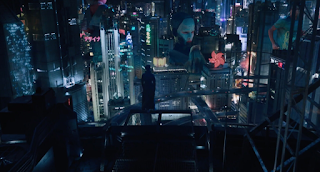 So, in an attempt to prove this wasn't white-washing the character of Major, the filmmakers decided to... white-wash Major? No seriously that's the twist, Scarlett finds out she used to be an Asian girl named Motoko, is this commentary on white-washing? Well, no because she never acknowledges that she was forced to be a different race. Scarlett also stays as Scarlett in the end, despite the obvious "out" they could've used. Sure, even if she reclaimed her identity, even if they had an Asian actress by the end, the film would still have an air of crappiness attached, just because it'd be easier to just give an Asian woman this role, but they could've made it worked. Imagine if they made the villains the only other white characters? Imagine if Motoko being turned white was to make a statement on Hollywood? Have the ending reveal Motoko has reclaimed her original appearance, make the villains state they turned her white because they viewed that as superior, see? Now there's context, now there's weight, now it works to an extent. Doing that wouldn't be perfect, but it would mean that they understood our complaints, it would mean our hero would end the film as she's meant to look, as an Asian woman, which would make her journey to find out the truth complete. Instead the movie acts like race means nothing, which can't be ignored when the race has been changed, while the movie decides to make that change an awfully dumb plot point. 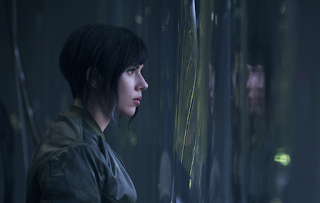 I did find this to be a tolerable film, better than it had any right to be, Ghost in the Shell is a decent film that almost was good, but you know what? Filmmakers who see race as no big deal can fuck right off. These movies keep bombing for a reason, stop pretending like you can get away with this white-washing crap.