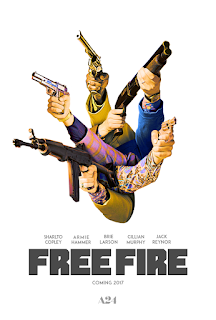 For quite a few guys, Free Fire will be the most, if not one of the most badass movies of the year. I'm definitely one of those guys.


There's a very basic plot here, one that would normally be a scene in a different film, but Free Fire turns that scene into the basis of a 90 minute feature, an impressive feat to be sure. So our story is in a warehouse, two groups arrive to make a deal, something goes awry, suddenly everyone is shooting at each other. Again, this is a very basic plot, in fact the set-up would normally be used for a small scene, not a feature, but thanks to some great writing and performances, this becomes an entertaining film to sit through, easily one of the most entertaining so far in the year.

There's a lot of talent on screen, Cillian Murphy, Brie Larson, Armie Hammer, Sharlto Copley, but the highlight ends up being Sam Riley as the moronic hired hand who essentially starts the whole mess. That's the funny thing throughout the early parts of this, Free Fire teases us on how this deal will go bad, I honestly assumed it would be something along the lines of one group realizing they're being double-crossed, but what actually sets this off is much smaller, dumber, and in many ways feels more fresh than we're led to believe. Of course this works because we get a lot of talented actors to help hook us in to what's essentially a 90 minute intro to an average crime drama. Many thanks must also be given to the writers, Amy Jump and Ben Wheatley (Wheatley also directed thus) who definitely deserve some recognition for making such a film feel like breeze, rather than the slog it could've easily been in the wrong hands.

The action here is of course top-notch, incredibly fun and tense, in fact I'd say it's perhaps the most tense I've seen in recent memory, given how real and visceral it can get at times. What especially works about it, is that there are no "super humans" here, if someone gets hurt in any way they remain hurt all throughout, which leads to some great humor. One of my personal favorite touches to this, is hearing the commentary we get from characters at times, you'll occasionally hear some arguments in the background, while the camera is focused on something or someone who isn't involved in their conversation, which just added a really fun element to the film. There's a lot of pain we can feel here, from just saying a bullet land, or seeing a character hurt themselves through foolishness, this is an effective action film.

Free Fire is a funny action film, that is more enthralling than you might expect from a film whose central premise is the basis of a scene, not a film. Watch it as soon as possible, this is a highlight for the year, as well as one of the more original films to hit theaters recently, I highly recommend this one. 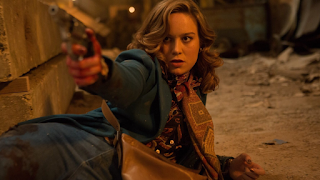