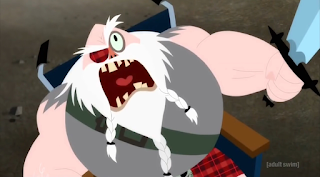 A fan favorite character returns in this week's Samurai Jack.


Every fan of Samurai Jack has got to love this right? A reappearance of the Scotsman is something we all expected, well, we got it, albeit an older Scotsman with an army of daughters, so you know he's been busy.

In all seriousness though, this was a cool way to reintroduce us to a great character, leading an army along various factions to defeat Aku. Surprising no one, Aku mows down the entirety of the army (minus the Scotsman's daughters) which leads to an entertaining exchange between Aku and the Scotsman, one that unfortunately doesn't end well for our beloved Scottish hero. This is all obvious set up for the finale, while also hinting at more beloved characters possibly returning for the ending, but it's a solid way to open an episode.

Back to Jack and Ashi's story, We see the two escaping the island they were trapped in last time, Jack decides to part ways, but Ashi still isn't fully convinced Jack is a hero. She pesters Jack to prove Aku is evil, something Jack isn't too keen on, it's a good way to continue from the last episode, Ashi isn't trusting Jack just yet, but she isn't interested in killing him anymore. We even get a touching scene where Jack explains the creation of the stars according to his mother, in contrast to what Ashi was raised to believe, it's all great stuff that makes the show feel more complete as a world.

Eventually our heroes get to a corrupt city, Jack finds himself a stylish new suit, while they both come across a wounded creature in need of help.This is where we reach the episode's darkest moment, Jack and Ashi encountering mind controlled children. Jack ends up fighting the kids, while Ashi fights off the manipulator, it's all incredibly tense and ends with a sour victory, Ashi frees the kids, but Jack in complete shock, believes the children are dead, leading him to walk away with a mysterious warrior that has followed him over the course of the past few episodes, it's a chilling moment full of intrigue, which will hopefully get resolved soon.

With yet another winner, Samurai Jack is truly becoming the best thing on TV right now. 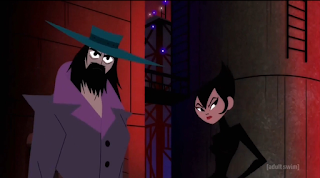