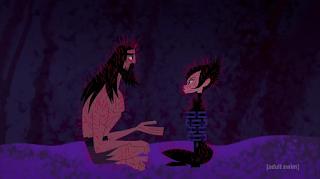 The latest Samurai Jack picks up where we left off last time, PLUS! Jack seems to be getting a new "frenemy".


Correct me if I'm wrong, but this is the most dialogue heavy episode of the season so far right? It's kinda refreshing, not because I hate silence, I love near silent episodes, but because Samurai Jack had some pretty strong episodes that featured a lot of dialogue in it's original run. In any case, this episode's main joke is "Jack tries helping Ashi understand he's not evil, Ashi thinks he's evil." You'd think that would get pretty boring, but it makes for a fun episode overall, we even get to see Jack lighten up with an acupuncture joke, it's charming to say the least.

Where this episode really excels though, is in the background and settings, there's a dark, but colorful thing going on here that feels a bit psychedelic. This is most noticeable once the show reaches its climax, wherein Jack and Ashi must escape through the blowhole of the beast they're trapped in. It's nice that the show can still get creative even when going through familiar ground (Jack even admits he's been inside beasts before), Jack traveling with a companion he hates is nothing new (Scotsman), but seeing him help someone who worships Aku provided an interesting inner conflict that is by far the most well done this season.

There's really not much else to say, this was another great episode, I can't name any actual flaws within this episode and I continue to be eager on seeing what happens next. 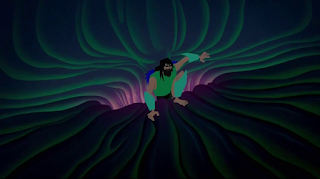