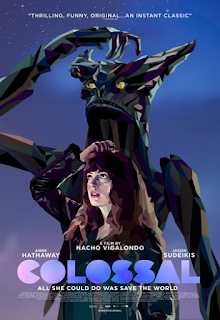 Holy crap, with this and Get Out, 2017 is shaping up to be a wonderful year for movies about various types of relations. 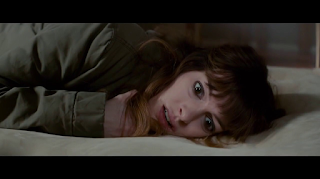 There's not a whole lot of buzz surrounding Colossal, which is a shame because it really is a terrific film. Sure, indie films getting little recognition is the norm, but after sitting through the film and looking at how well something like Get Out was received by the general public, I wish this would recieve some more love from the public. That isn't to say this is the same as that film, regarding it's plot, but as I thought about the central themes, I was reminded by Peele's film, in the sense that this is a look at male and female relationships, much like that was a look at the relationships found between different races, how hate can manifest in subtle ways. It's the similar themes that make me wish this did recieve more attention, but to explain further would be to mildly spoil the film, so if you wish to not receive those, stop reading now, go watch it and come back, cause trust me, you're gonna want to go to this one cold.

Right from the beginning, this is an odd film, as it opens with a kaiju in Seoul, only to jump two and a half decades later, where we find our lead, Anne Hathaway, drunkenly walking into a break up. From there, the movie plays like a silly romcom as she moves back to her hometown, an encounter with a childhood friend leads to what feels pretty formulaic, even if a bit charming. Jason Sudeikis is the kind childhood friend, he introduces Hathaway to his crazy friend, as well as his attractive friend, from here, we can gather there may be a love triangle, or maybe just a funny tale of love, but remember, we opened with a kaiju. So, sometime after Jason introduces our lead to the supporting cast, the news reveals Seoul is being attacked by a monster, Hathaway quickly deduces it's movements are hers, from there, the movie takes a few turns, and goes more into thriller territory, no longer is it as conventional as we were led to believe. This isn't a rom-com, Hathaway is learning to confront the male figures in her life, while learning to be independent; suffice to say, while not every guy is a jerk, we do see how even "nice guys" can be controlling jerks. It's an odd, but interesting look in relationships not often explored, the friends who aren't as they present themselves to be.

Everyone onboard gives terrific performances, but it's Anne and Jason who really succeed, they're both incredible as the film escalates. I often feel like Hathaway doesn't get enough credit for her performances, so it's nice to see a film take full advantage of her talents, come award season I'll be disappointed if this gets ignored, she's a believable mess here, a role I don't see many women pull off. Sudeikis on the other hand, he starts off likable as the "nice guy", but seeing him become the kind of "nice guy" we often hear about these days is fascinating, you'd think it'd feel off and out of character, but due to a great performance it ends up being natural and solid. This is a character piece, despite the kaiju stuff (which is more cute than awesome) we are given a great story, with great performances at the center of why it all works.

Honestly guys,  go watch this film and think about what it has to say, while the women out there, I hope you find this to be entertaining as well as a nice representation of interactions you might have had at some point with some men in your life, I know it's not commonly showcased. Seriously, go watch Colossal, spread the word on it, this movie deserves a bigger audience asap.