THE LEGEND OF ZELDA:BREATH OF THE WILD-REVIEW 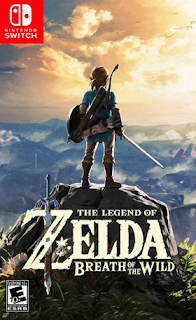 Well after a month it's finally here, my review on The Legend of Zelda:Breath of the Wild. Upfront, no I haven't gotten the hundred percent completion here yet. 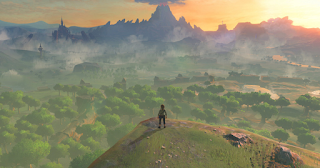 This is a massive game, you've probably already heard that, but it's true, the size on this is amazing to take in. Right from the start, we 're shown the world we will traverse on our quest, it's a moment of both beauty and awe as we stand with our possibilities, will we follow the game's initial guide, or just muck about in our own way? That's the question we are given, despite it never being said. As soon as we learn all the basic functions of the game, we can reach the end without having done anything to prepare, or we can prepare to make the final boss an easier one, it gives us the players some freedom, though I'd be lying if I said this was good enough, personally, I would've liked to have been allowed to reach the final boss without even getting the new paraglider, it would make for something even more interesting/challenging I think. 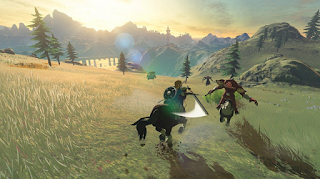 Speaking of interesting challenges, the combat here is top notch. While I'll admit the weapon durability stuff never really works (I hate losing cool weapons just because I cut some trees), there's a solid combat system built into this. Enemies are presented with some of the best A.I. I've seen in a game, yes the smaller enemies can be moronic, but they are given great animation to show a bit of a silly personality to them. I should emphasize the A.I. though, these foes were smart enough to pick up when I'd perform certain actions, they'd know someone was messing with them from a distance, even if they didn't catch me, it'd be a while before they'd stop investigating who just caused an explosion. If anything made me want to fight enemies in this game, it was their personality and the excitement of knowing I'd have to properly strategize, whether it was hitting them from a distance, wearing a mask to blend in and distract them with food, or just freezing the hardest hitters while I take out the weaker foes. I just wish some of my encounters with foes weren't just because I needed a few weapons, things break easily here, to a laughable degree, why does my bow break after I shoot a few arrows? I still have a hammer at home from when I was five, you can't tell me there was no better way for the combat to handle this. While the weapon durability problem eventually becomes a minor issue, I still wished they could've thought things through, maybe the weapon could break, but only if a stronger enemy blocked your attack hard enough that your sword took some damage of its own? Kinda like how the shield only breaks if you let it absorb damage instead of reflecting it. Just a suggestion, but I do hope a future Zelda title acknowledges that this isn't very fun. 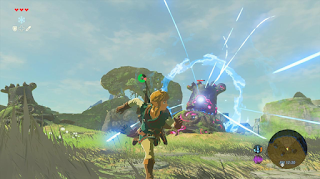 Eventually, we do come across stronger foes, ones that even terrified me a bit as I was still learning the ropes. One such enemy, are the Guardians, Hylian machines that are a mix of the Golem of Jewish lore, and spiders. These foes have become a part of the marketing for this game, as all trailers made some effort to include these foes as a selling point, "look at our cool new robots" they seem to shout. Indeed they are stand out foes in the franchise, even if they eventually become easy to destroy, so long as you only fight one at a time. 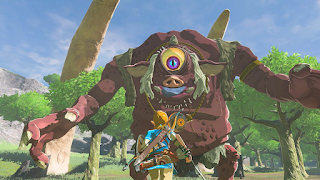 There's also a selection of "mini-bosses" found in the vast open world, giant cyclops beasts sleeping, rock monsters, even centaurs. Even if these foes can be found in multiple variations, there was always excitement in fighting all of these, even fear regarding the centaurs, here known as Lynels, who end up being harder than the actual bosses of the game. Still, it was always fun to find these at random, though preferable when some smaller enemies (like Yiga Clan ninjas) were not around to muck up the strategy in facing them all. 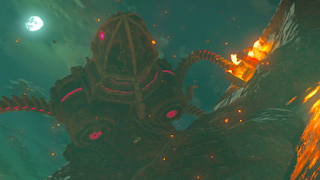 The "not so mandatory" quest this time, is defeating the Divine Beasts, giant mechanical creatures that aid you in the final battle. I love this in theory, but making the beasts the "dungeons" here was a bit lackluster. The concepts are interesting to be sure, but they all end up feeling too similar, versus classic Zelda dungeons, which often felt unique. Sure, the shrines make up (to some extent anyway) the loss of traditional dungeons more bearable, but I do wish they had tried harder to bring them in. The real disappointment though, comes from the boss fights, they're all fun, but much like the beasts, they end up feeling too similar, I wish my initial thought of fighting the gigantic machines as the bosses would've been true. Each villain has their own theme, but they all end up feeling like variations of the same idea, which especially kills the game's final boss, as Calamity Ganon feels like the most original/unique of the bosses, but by that point we've already seen what feels like the concept art of that boss.

Despite my complaints though, this is one incredible game, I'm amazed that I even love it as much as I do. Yes, weapon durability sucks, the bosses aren't memorable, or even as challenging as the strongest mini-bosses of the game, the dungeons aren't even amazing, but the game works so well, it's hard to even stay mad at. I loved exploring, I loved creating foods and potions for my quest, I loved that even as I got lost I manage to find something helpful or fun in my quest, I even loved finding NPCs on the road. There's just so much personality, adventure, creativity and things to do in this game, it's hard not to like this, despite having huge flaws compared to even weaker entries in the franchise. The Legend of Zelda:Breath of the Wild is a near perfect game, despite having major flaws, it manages to do so much well, in fact, a lot of it goes above and beyond to be amazing, that my complaints feel like nitpicks whenever I actually play the game. You need to play it now, don't have a Switch? Then go get one now, this is a game that earns it's place as a "system seller", easily among the best games ever released in any launch, go play now!